by Heather Kolich
Prev NEXT
7 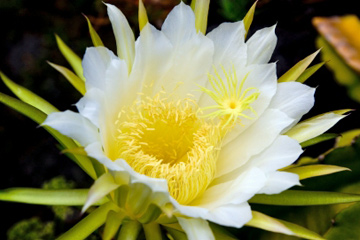 The Queen of the Night blooms from a pretty ugly cactus every summer.
©iStockphoto.com/mlenny

A dismal gray cactus sprawls across the sand. It sprouts a few ribbed, twiggy stems with fragile spines. It looks dead. And yet, sometime in June or July, this ugly waste will transform into the "Queen of the Night." Because in midsummer, a miraculous awakening takes place in the Sonora and Chihuahua deserts of Arizona, Texas and northern Mexico: the night-blooming Cereus cactus opens its white flower and perfumes the dry air.

More specifically, three species of night-blooming cacti, Cereus greggii, Hylocereus undatus, and Selenicereus, become queen for one night. As the sun goes down, the cactus opens 8-inch long by 4-inch wide (20-centimeter by 10-centimeter), many-petalled white flowers with yellow-tipped stamens [source : Royo, Ladyman]. The fragrance can spread as far as 98 feet (30 meters) from the bloom [source: Ladyman]. Through the night, hawk moths and other nocturnal insects feed on the nectar and cross-pollinate the flowers. In the morning, the flowers close up, never to open again.

New flowers may open on subsequent nights, but the festival of the night-blooming Cereus usually only lasts for a day or two. If the flowers are successfully pollinated, they develop an oblong, spiny, red-orange fruit. The plant grows from a tuberous taproot that's edible. Cereus greggii may provide an evolutionary link between a woody, non-succulent predecessor and modern succulents.

Night-blooming Cereus can be grown as a houseplant. It's easy to root stem cuttings, but it's a protected species, so don't go trolling the deserts for one. Get a 2 to 4-inch (5 to 10-centimeter) cutting from a friend, put it in sandy soil and moisten it. It should root within six weeks, but it will be two or three years before it's mature enough to bloom. To encourage flowering, put the plant outside under filtered light during the summer and fertilize it monthly from May to August. Water it regularly, but let it dry out between watering.

During the winter, keep it hungry and dry; don't fertilize it and let it go for longer periods between watering. "This is the season where you want the plant in a spare bedroom -- getting needed sunlight, but out of sight," advise the specialty gardeners at the University of Arkansas Cooperative Extension Service [source: University of Arkansas]. It's a homely plant when not in bloom.

Creatures of the Night