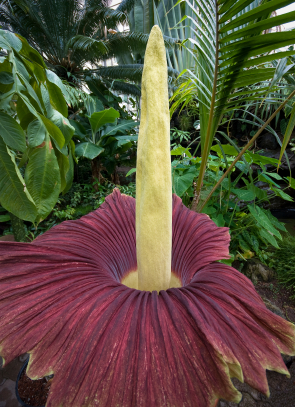 We admire flowers for the beauty and alluring scents they bring to our personal and public landscapes. Flowers are a matter of pride for gardeners, a means of expression for lovers and they play a role in some of our most joyous and somber societal rituals. With almost $4 billion in sales in 2006, floriculture is also an economically important industry in the United States [source: Economic Research Service].

But to the plant, flowers are a deadly serious business. The plant's survival depends on the appeal of its flower to a distinctly non-human client list. Sensory stimulating petals and odors have one purpose: to draw pollinating insects and animals to the plant's reproductive organs, the stamens and pistil, housed inside the flower.

Flowering plants are seed-producing members of the plant kingdom. Not all seed-producing plants flower, though. Gymnosperms reproduce through seeds housed in cones. These conifers show up in fossils dating back 360 million years. Angiosperms, the flowering plants, popped without precursors into the fossil record during the middle of the Cretaceous Period, about 130 million years ago [source: Kanapaux].

During that 130 million years, flowers took on an amazing variety of shapes, colors and scents in their efforts to attract the creatures they need to complete pollination and produce seeds for the next generation. Bees, bats, birds, butterflies and other pollinators respond to different stimuli. Successful plants developed flowers that deliver the particular stimuli required to interest their pollinating partners, as well as hospitable physical traits, such as landing platforms for insects. The orchid family, Orchidacaea, is the largest and most diverse family of flowering plants. There are least 28,000 species and more than 300,000 cultivars of orchids, with more developing almost daily [source: Thomas]. One species, the bee orchid (Ophrys apifera) of the British Isles, mimics a female bee in appearance and scent to attract the earlier hatching male bees that spread its pollen around.

There are currently 235,000 known species of flowers in the world, and more are discovered every year [source: Wahlert]. More than 60 percent of these grow in the warm, wet climate of tropical rainforests source: Marent]. Some tropical flowers go to extremes in size, odor and survival strategies. Most of these couldn't survive in a suburban garden, and you probably wouldn't want them to. Appeal to human sensibilities isn't foremost in their reproductive struggle, and who wants to be known as the neighbor who cultivated the stinkiest flower in the world, or "Audrey III"?

There are, however, some uncommon flowers that you can safely harbor in your garden or on your window sill. In this article, we'll examine 10 very unusual flowers, from bizarre tropical blooms that mimic carrion to native North American flesh eaters. We'll also look at some unique flowers that could add interest and conversation starters to your landscape.

Meet the world's largest flower on the next page.