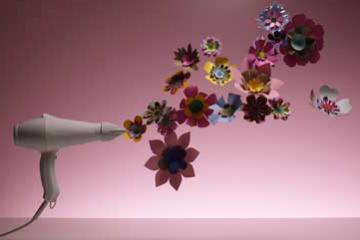 Wintery morning commutes would be a lot more unpleasant if hair dryers weren't around.
Razmaz/Stone+/Getty Images

Many people are familiar with the daily routine of washing, drying, and styling their hair. Although hair will eventually dry on its own if given enough time, most people reach for a hair dryer to speed up the process. While science may have disproven the link between wet heads and catching colds, it's still no fun to sit around with a head full of wet hair, especially in the winter.

Hair dryers, also known as blow dryers, were first sold in the 1920s. At first they were pretty dangerous to use -- hundreds of people were electrocuted when they dropped their hair dryer into water-filled sinks and bathtubs.

That isn't as likely today, however, because of the advent of Ground Fault Circuit Interrupters (GFCI). Since 1991, all portable hair dryers have been required by U.S. federal law to protect you against electrocution should you accidentally drop one in water while it's plugged in [source: CSPC]. This applies whether the hair dryer is on or off. A GFCI is the larger, polarized plug that you'll find on many consumer appliances. When they're plugged in, GFCIs monitor the amount of current that's running from one slot of a wall outlet through an electric circuit and back to the other slot. If they sense a leak in the current, they trip the circuit. (See How does a GFCI outlet work? for details).

What happens to a hair dryer if you drop it in water when it's not plugged in? You don't run the risk of electrocution, since there's no source of current, but you can certainly damage the hair dryer if all of its components get wet. So, plugged in or not, it's a bad idea to throw it in the tub.

Have you ever wondered what those components are inside a hair dryer that lets you blow hot air through your hair without burning your scalp? Keep reading to find out why you won't sizzle.­ 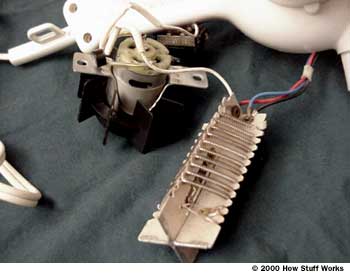 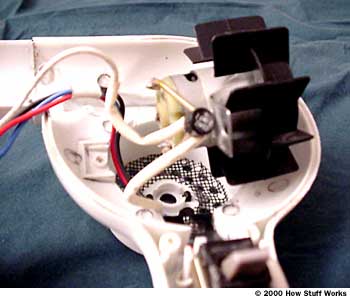 The small black fan sits atop the motor. The motor spins the fan. Air is drawn in through the openings on the side of the hair dryer.

How does a hair dryer generate such a strong gust of air in the first place? This model uses a small fan that looks like a hydraulic turbine (i.e. water wheel). Unlike the water wheel, which harnesses the potential energy of flowing water to generate power, the fan in a hair dryer uses electrical energy to generate airflow. The small motor actually sits inside the fan, which is firmly attached to the tip of the motor. When you supply power to the motor, the motor and the attached fan both spin. The centrifugal movement of the fan blades draws air in through the small round air inlets in the side casing of the hair dryer. These holes are covered by a safety screen that prevents other objects (such as strands of your hair) from being sucked in as well. The air is then blown down the barrel of the hair dryer.

Most hair dryers (including this one) have high and low airflow settings. You'll see this referred to in the manual accompanying the hair dryer as high or low speed, because changing the airflow involves modulating the speed at which the motor is turning. This is accomplished very simply by altering the current flowing through the part of the circuit feeding the motor. When the power supplied is low, the motor and the fan spin slowly. Less air is pushed through the hair dryer. With more power, the motor speeds up. The fan rotates rapidly, drawing in more air and increasing the airflow.

Newer and more expensive hair dryers have systems which don't just deliver hot air, they deliver hot air full of ions in the form of charged particles. The companies utilizing this technology claim it's supposed to help hair dry more quickly, lose the static and become healthier, smoother and shinier. Decreasing static is said to help hair be more manageable and less prone to attracting dirt and dust. Ion generators can manifest in a number of different design schematics and be located in a variety of points within the hair dryer.

Things will really start to heat up on the next page when we take a closer look at how these gusty little appliances actually dry our hair. 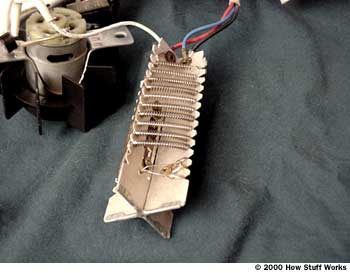 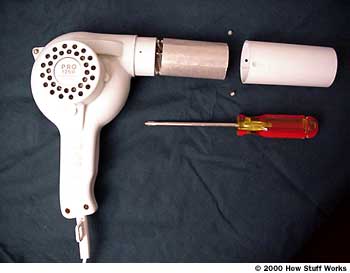 The heat shield keeps the barrel of the hair dryer from becoming too hot.

The basic idea behind hair dryers is pretty simple, but producing one for mass consumption requires some hard thinking about safety features. Manufacturers have to predict how their hair dryer might be misused. They then try to design a product that will be safe in the widest variety of conditions.

Besides the ground fault circuit interrupters we learned about on the first page, here are some other safety features hair dryers commonly have:

For more information on other household appliances showing their warm, fuzzy side -- whether by drying your clothes, toasting your bread or starting your car -- get your motor going on the next page with a bunch of interesting links.

Time to Vent: Why You Need to Turn on the Kitchen Exhaust Fan
Is America Finally Ready for the Bidet?
How Tankless Toilets Work