Top 10 Things to Recycle at Your Construction Site 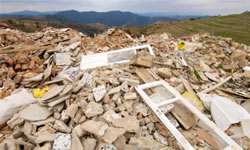 Construction and demolition waste are the largest sources of trash in the United States. See more pictures of home construction.
Hemera/Thinkstock

Like most cities, Akron, Ohio has its share of vacant buildings. In the past, no one would have batted an eye at taking a wrecking ball and razing the structures. Not any longer. In 2010, the city and the local Habitat for Humanity began to dismantle four empty structures bit-by-bit instead of bulldozing them.

If taking a house apart, board-by-board, shingle-by-shingle, seems like a tedious -- some would say painstaking -- job, it is. A demolition contractor can usually tear down a single-family house in two days; it took Akron Habitat workers 20. The city usually pays a contractor $3,484 to knock down a home, but Akron paid Habitat for Humanity $7,500 to "deconstruct" one house [source: Breckenridge].

Although deconstruction, the process of tearing down a house while salvaging and recycling building materials, is initially more expensive and time consuming than outright demolition, it is far better for the environment. In deconstructing a building, workers save and reuse whatever materials they can instead of taking the debris to a local landfill. In fact, Habitat plans to sell what they retrieve so others can reuse the materials.

While not every bit of construction and demolition debris can -- or even should -- be recycled, much of what goes into a house can be reused. Go to the next page to find out which construction materials can easily be recycled at your job site. 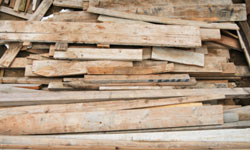 Re-milled lumber and timber can be used for new flooring, paneling, doors and windows.
iStockphoto/Thinkstock

Contractors build roughly 1 million new single-family homes each year in the United States at a cost of nearly $100 billion [source: Falk]. That amount balloons to nearly $200 billion when you take into account construction of multi-family and manufactured homes, as well as the repair and renovation of existing homes [source: Falk]. Most of that money is spent on wood used for framing, sheathing, doors, floors and windows, and much of that wood comes from virgin timber [source: Falk].

The U.S. government estimates nearly 1 billion board-feet in lumber can be salvaged each year [source: U.S. Department of Agriculture]. Much of that wood is high quality and includes large timber frames. If builders recycled or reused all the wood in a 2,000-square-foot home, it would generate up to 6,000 board-feet in reusable lumber, saving 33 trees. In addition, recycling would reduce the volume of wood taking up landfill space by at least 8,420 cubic feet (238 cubic meters) [source: Deconstruction Institute].

Workers can reuse wood in a variety of ways. By re-milling old lumber and timber, contractors can build new floors, paneling, doors and windows. Builders can also reuse wood to construct new barns and fences. That's not all. Machines can easily grind waste wood so that it can later be turned into particleboard. 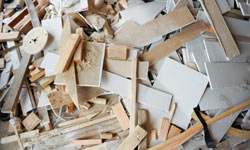 Scraps of drywall can be used for wall patches, and also mixed with soil as a nutrient-rich food source for plants.
©iStockphoto.com/Mel Stoutsenberger

What would a building be without drywall? For one thing, it would be pretty chilly inside during the winter because there wouldn't be any interior walls. Drywall is made of gypsum sandwiched between two sheets of paper. It is the prime material used in interior construction and home renovation work. The United States produces about 15 million tons of new drywall annually [source: CA.gov]. Concurrently, about 25 percent of all construction waste is made up of drywall [source: Ohio State University].

Fortunately, drywall is easy to recycle and reuse. Builders can use scraps of it to plug openings in walls, and workers can also use bits of it to fashion forms to support wet concrete. Drywall can also be turned into agricultural products. Specifically, drywall contains boron. Although boron is known as a fire retardant, it's also a plant nutrient. Landscapers can mix the element with soil to provide plants with a source of nutrient-rich food [source: CA.gov]. In addition, the paper that surrounds the gypsum can also be added to soil, recycled into paperboard or new wallboard, or composted for fertilizer [source: CA.gov].

Developers often use steel to build the superstructures of skyscrapers, high-rise apartment buildings, bridges and other structures. Americans recycle more than 65 million tons of scrap steel each year. Recycled steel maintains its strength and durability. In fact, all steel framing contains at least 28 percent of recycled steel. To build a typical 2,000-square-foot house, workers will use an amount of steel equal to about six junked automobiles [source: Recycle Steel]. Steel girders, trusses and pilings can all be recycled from construction sites.

Much of the steel debris from the World Trade Center was recycled. Several tons were even used to construct the bow of the U.S. Navy's assault ship, the USS New York.

Believe it or not, nearly 11 million tons of roofing shingle waste is generated each year in the United States. Most of that waste -- 10 million tons -- comes from the shingles off of old homes [source: CA.gov]. Unlike many construction materials, roofing shingles are very durable. They can last nearly 20 or 30 years before they need to be replaced.

Most shingles are made from a felt mat infused with asphalt (which is made from crude oil) and tiny bits of rock. These shingles are hardy, and can withstand scorching heat and bone-chilling temperatures. But when they are removed from a roof, they can be ground down and actually used in pavement projects and as patches for potholes. Shingles can also be recycled into new shingles and sometimes processed into fuel [source: CA.gov].

If you can reuse your old windows in any construction and renovation project, then you should. While recycling windows and other glass products might seem like a good thing, builders rarely do it. Why is that? First, glass is cheap to make. There's a seemingly unending supply of its main ingredient: sand. Second, glass makers have very precise requirements for their products, and recycled glass sometimes doesn't fit well within the specifications of these products. While all glass is basically the same thing, there are subtle differences depending on what the glass is used for.

Additionally, window glass includes many parts, such as aluminum, vinyl, insulating spacers and lamination layers that need to be removed before the window can be recycled. It is usually very time consuming and costly to remove these parts [source: American Architectural Manufacturers Association]. 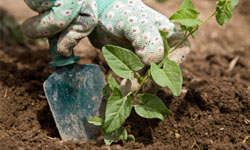 Homeowners can move and replant vegetation such as hydrangeas, hostas and rosebushes.
©iStockphoto.com/Rich Legg

When you're cutting brush from your backyard, or removing trees and other vegetation to make room for a new house, recycling landscape waste should be an important part of your building plan. Many states and local communities have banned landscape waste from local landfills, so contractors are pretty much required to reuse or recycle the waste. Contractors can use most yard waste as mulch to place around the yard as a landscape accent and to reduce weed growth. Homeowners can also compost most landscape waste, or dig up and replant vegetation such as hydrangeas, hostas and rosebushes.

There are second acts in life, especially for most appliances. If your construction project includes a major kitchen addition or renovation, and the homeowners are purchasing new appliances, there are a few things you can do with the old ones including the following: 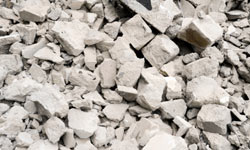 Concrete and masonry is easy to recycle, and nearly 140 million tons of it is crushed and reused each year.
©iStockphoto.com/Mel Stoutsenberger

Once thought of as mere garbage, concrete debris is now routinely recycled and reused, saving builders millions of dollars and freeing up space in landfills. Each year, construction companies recycle 140 million tons of concrete in the United States [source: Concrete Materials Recycling Association.

Once concrete and masonry rubble is removed from a construction site, the waste is taken to a crushing center for a fee. These facilities, which only accept concrete that is free of trash, wood and other materials, will crush and screen the debris to remove dirt and other particles. Concrete can also be crushed and sifted at the job site [source: Concrete Materials Recycling Association]. Once crushed, concrete can be reused in pavement for roads and driveways. Recycled concrete is also a good foundation on top of which contractors can place pipes and other utilities. Landscapers also use larger pieces of concrete rubble in their work.

Each year, thousands of miles of roadway are resurfaced or replaced. Builders not only use asphalt to build roads in residential neighborhoods, but also in highways, airport runways and parking lots. The Federal Highway Administration estimates that construction crews remove 90 million tons of asphalt each year from American roads. Out of that number, a whopping 90 percent is recycled and reused in repaving and reconstruction projects [source: Brown].

Copper is a much sought-after metal. The average home contains about 400 pounds of copper piping and wiring [source: DIY Network]. Copper can fetch up to $3 a pound in some areas. In fact, the copper recycling market is so lucrative that thieves often break into construction sites to steal copper piping and wire. Like steel, when copper is recycled it retains its strength and durability. However, many local codes require new buildings materials. For instance, copper pipe and wire cannot be reused in plumbing or electrical installations so it's more often salvaged and sold to junkyards and scrap-metal dealers to be used elsewhere [source: Zeller].