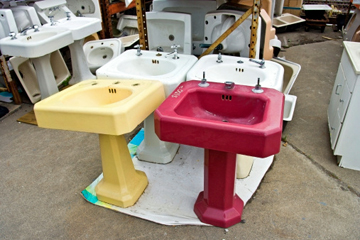 Plumbing is one of the most-popular categories of salvaged construction materials. Want to learn more? Check out these home construction pictures!
iStockphoto/Thinkstock

An incredible 74 million tons (67.1 million metric tons) of debris are created every year from the demolition of commercial and residential buildings, according to U.S. Census Bureau data [source: EPA]. If all of that gets stuffed into landfills, it will create myriad problems, as landfills emit greenhouse gases, harbor disease carriers such as rats and flies, and reduce natural habitat [source: Penn State University]. Far better, then, to salvage as much of this detritus as we can.

Before the wrecking ball begins to swing on your home or business, consider removing valuable materials: everything from doors and windows to woodwork, fixtures and architectural accents. Much of this can be sold for a tidy profit. It may make sense to deconstruct your entire building instead of demolishing it. Deconstruction involves carefully taking apart a structure by hand to preserve reusable materials -- no wrecking ball required -- and can result in up to 90 percent of materials being reused or recycled [source: EPA]. While deconstruction itself generally costs more than demolition, you can end up ahead because you'll earn money from selling the salvageable pieces [source: Bowman].

But the benefits of salvaging construction materials go beyond protecting our environment and personal health, and earning money selling salvaged parts. Yes, it's environmentally responsible to keep debris out of landfills. But did you also realize that if you renovate an old building instead of tearing it down and creating a new one, you're saving the significant amount of energy it takes to produce a new building? There's a lot of energy spent doing everything from milling lumber and mining copper to shipping finished materials all over the map [source: Bowman].

Salvaging materials and reusing them also allows you to create something new and unique, and to preserve history -- maybe even your own. One Ohio woman, heartbroken at having to tear down her family's dilapidated vacation cottage, was able to use bead board from its fireplace surround as wainscoting in the bathroom of the new home she was building, plus use a fine built-in cupboard as a linen closet. She also took a bowling-alley lane from an old business in her area and turned it into a kitchen counter [source: Breckenridge]. Now her new house has a comforting, familiar feel, some interesting features and a great story. What's not to like about that?

Beware of These Salvage Issues

Rescuing old construction materials before they're sent to their death in a landfill can be a really smart idea. But not everything that's old should be saved and reused, even if it would look supercool in your home or office. Here's what you need to watch out for with some of the more popular salvaged materials.

Recently, my sister-in-law acquired a new hobby -- stopping in at the local resale shop and purchasing old paintings. You know, the kind with elaborate wooden frames. She cleans off the pictures, then paints them with blackboard paint. Voilà -- she now has a decorative blackboard for her kitchen, where she can leave notes for the family. And a small one for the wall, where she can jot down a grocery list. And an immense one for her entryway, which she can place on an easel and use as a sign at parties to proclaim everything from "Happy 80th, Mom!" to "The party's downstairs!" She gave me a small one for my kitchen island, which I use to list the day's supper menu so I don't have to hear, "What's for dinner?" every time the next family member comes home. What a great, creative use of an unwanted item. Next time to you pass a resale shop, stop in and see what you can come up with.

Most Abundant Man-made Material Is Cutting Its Carbon Footprint
How do you find an environmentally responsible architect?
What is the code for sustainable homes?