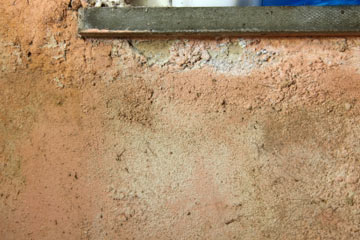 Efflorescence deposits are usually white, like the ones shown here, but they also can be yellow or green. See more home construction pictures.
©iStockphoto.com/dirkr

When Michelangelo started painting his famous frescoes on the ceiling of the Sistine Chapel in 1508, an unsightly white film appeared, marring parts of his masterpiece. "I am in a great quandary," the artist wrote of the situation [source: Ford]. The problem that stumped him was efflorescence, a powdery deposit that appears on masonry walls and concrete slabs, and believe it or not, that same discoloration has caused similar frustrations for many an unhappy homeowner in more recent times.

The word efflorescence comes from a term meaning "flowering," but the issue is no bed of roses for either artist or homeowner. It can affect brick walls, stucco, concrete slabs, patio stones -- almost any form of masonry. Stained concrete is a popular form of flooring these days, and efflorescence is all the more noticeable on the dark concrete slabs used for this purpose.

The culprit here is the soluble salt often found in concrete, brick or mortar. Water drawn to the surface through porous openings brings the salt with it. As the water dries, the salt is left behind as a solid.

As mentioned, those salt deposits are usually white or gray, but they also can be yellow or green, depending on the type of salt involved. They may appear chalky or as a light scum. Sometimes, they form as crystals or "whiskers" that create a kind of fuzz in a small area. Other times, they cover a wide surface [source: Delaware Quarries].

Efflorescence is usually not a structural problem, but a matter of appearance. In rare cases, the accumulation of salts can weaken the masonry or cause spalling, which is a chipping or blistering of the surface. Persistent efflorescence can also point to a moisture problem, which might result in mold [source: Bannister].

Unsightly efflorescence can be a vexing issue, as it often appears without warning and can be difficult to cure. It may even leave homeowners and contractors in the same quandary as Michelangelo, who had to chip away damaged sections of his painting and start over. But don't get too worried just yet. On the next page, you'll read about the three conditions needed to produce efflorescence, which may point you toward some ways of solving the problem.