It's Germier Than Your Toilet: Clean Your Keyboard NOW

Browse the article It's Germier Than Your Toilet: Clean Your Keyboard NOW 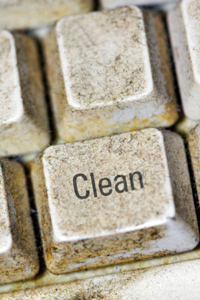 Grimy, dirty, sticky keys can spread germs and possibly cause your keyboard to stop working altogether. Use our tips to keep your keyboard clean and to cut down on germs.
iStockphoto/Thinkstock

Your computer probably isn't much use if you can't input information. For most people, devices used for input are a computer keyboard and a pointer device such as a mouse or trackpad. These are the parts we actively work with when we "use the computer," and they're the parts that will show the most evidence of our use and abuse over time.

Because computers are so much a part of our lives, they can also carry evidence of everything we do with our hands. Like all surfaces you touch throughout the day, your computer keyboard and mouse are places where dirt, oil and germs can collect. If you share a computer, or if you use public computers such as in a library, this problem can be multiplied.

But just how dirty can a keyboard get from all that touching? In 2008, British microbiologist James Francis swabbed more than 30 keyboards plus a toilet seat and toilet door handle in hopes of answering that question for consumer group Which? in the United Kingdom. He found that four of the keyboards had harmful bacteria that could cause illness. In fact, one of the keyboards had germs five times higher than on the toilet seat [source: Which?].

While the Francis experiment only looked at a single office in London, the results aren't unique. Other studies showed that a keyboard and mouse shared among students in a first-grade classroom had a virus linked to stomach flu [source: Childs]. It's definitely enough to make you think about what might be growing on your space bar!

Beyond potentially harmful germs, you could also be leaving stuff on your computer that affects how it works. If you eat or drink around your keyboard, you're probably dropping crumbs or splashing fluids, even if you can't see it happening. If you have pets, you may also get pet hair or dander mixed in with the dust and dirt that accumulates. Over time, all this debris works its way into the spaces between and under your keys. This could cause you to have sticky keys or keys that just stop working because the electronics can no longer read the keystroke.

This article covers some simple steps and routine cleaning tasks you can take to clean the gunk out of your keyboard and to cut down on germs. 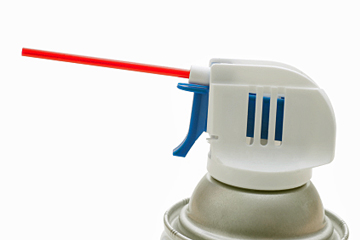 Canned air can help you blow the dust and crumbs out of your keyboard.
© iStockphoto.com/dterick

Your keyboard might be anything from a large tray with bulky keys that click loudly when you type to a thin metal board with quiet, low-profile keys. No matter which type you have, though, you probably have gutters or crevices between and under the keys. Those spaces gather dust, dirt, hair and crumbs.

You can start the routine of eliminating this debris by turning your keyboard upside down once a month and shaking it. Yes, really! If it's a laptop, shut it down first so the hard drive isn't moving, and shake it very gently. You may be surprised at how much falls out, especially if you have pets or if you eat while you're using the computer. It's best to do this in a space you can wipe down or sweep thoroughly when you're done.

What about those stubborn crumbs that won't fall out or get stuck under the keys? This debris is still loose enough that a gas duster, popularly called "canned air," can help. Before you use the gas duster, prop the keyboard up sideways on a steady surface so the debris will fall out. Then, using the duster as directed, aim the straw sideways along the gutters and crevices of the keyboard. After a series of short bursts, tap out any debris that doesn't readily fall out after you loosen it. Repeat this process until you're satisfied your keyboard is free of loose debris.

Though it's called "compressed air," don't substitute canned air with an air compressor. Air compressors, such as the one you might use to fill your car's tires, can damage the keyboard with too much pressure or with the chemicals often present in the air. A gas duster is lower pressure and uses chemicals that won't damage your computer if you use the duster correctly. If you pull the trigger on the duster when the can is upside down, the chemicals will spray out as a liquid -- and it's never a good idea to get liquid in your computer.

If you are still looking for something other than a gas duster to get rid of loose debris, do an Internet search for keyboard-cleaning supplies. There are several inventions on the market that can help, from simple cleaning brushes to small, specially designed computer vacuums with various attachments. Even if you're trying to save money, though, avoid using devices that aren't designed for use on computers. For example, a typical household vacuum for carpets and furniture can create static electricity -- damaging to the keyboard circuitry -- whether it's sucking or blowing the air.

If the dirt or crumbs are sticky or just too stubborn to be blown out by the gas duster, don't start popping the keys off just yet. Go on to the next page to read how to tackle a deeper clean for sticky keyboards.

How to Clean a Sticky Computer Keyboard

Not everything that falls in the cracks of your computer keyboard can be removed with a gas duster or vigorous shaking. The oils from your fingers can get on everything you touch, including your keys. Splatters of sugary drinks or other sticky liquids can also fall on the surface as well as in the cracks between keys. As you use the keys, this oily and sticky gunk spreads to other parts of the keyboard, capturing and trapping the dirt and germs from your fingers along the way.

To fight the gunk, and to promote good health, add surface cleaning and germ killing to your routine of keyboard cleaning. Weekly, wipe the surface of your computer with a lint-free cloth that's slightly dampened (not dripping). If you're using a laptop, be sure to shut it off first. Though you could use water to dampen the cloth, it won't cut the dirt and grease, and it won't kill the germs. Instead, use sprays and pre-moistened wipes that are specially designed to clean a computer keyboard. Some of these cleaners include anti-bacterial chemicals to help kill germs and sanitize the surface.

Do you really need to buy special cleaner to get the same results? Not really. You can get similar results using a 50-50 mixture of tap water and isopropyl alcohol, available for a fraction of the cost. Though the alcohol is also an antiseptic, it may not kill all the germs. To kill more germs, use an antibacterial household surface cleaner after you've removed the grimy stuff. Prevent the liquid from running between and under the keys by not spraying cleaner directly on the keyboard and by making sure the cloth or wipe is damp but not dripping.

Need to go deeper? You can use cotton swabs damped with isopropyl alcohol to get into tight spaces between and under keys. Be careful doing this, though: disconnect the keyboard or remove the laptop battery to prevent shock, and avoid getting the cotton fibers caught in the tight spaces. Also, be prepared to go through a dozen or more cotton swabs through this process, depending on how dirty the keyboard is. You can pop off keys for easier access, but only use this as a last resort: the keys might be delicate and break in a way that prevents them from being reattached. Never glue a broken key back on your keyboard!

Get started cleaning that keyboard now! Click over to the next page for lots more information about how to keep your keyboard clean and sanitized.

Can I put my keyboard in the dishwasher?

There is only partial truth to the statement that computer keyboards and mice can be cleaned in an automatic dishwasher. Some keyboards and mice are built in such a way that the bombardment of water will not damage their function. In fact, some companies even target this as a main feature of the product [source: Seal Shield]. However, most modern keyboards and mice can be irreparably damaged by the heat and water in a dishwasher [source: Greenfieldboyce]. Unless you have a keyboard or mouse that's guaranteed dishwasher-safe, stick to cleaning it with a damp cloth or gas duster as needed.