Easy Fixes for that Sewage Smell

The first possible cause of a sewage smell in your bathroom is by far the easiest to fix, and more likely to occur in bathrooms where fixtures haven't been used recently, such as the sink in a guest bathroom or the tub in a bathroom with a separate shower. The issue in situations like these is that the water in the P-trap has simply evaporated due to lack of use, effectively removing the barrier between your bathroom and the gases in the sewer system. If that's the case, the solution is as simple as running some water to allow the P-trap to fill up again [source: Wm. Henderson]. If plain running water isn't cutting it, Patrick recommends using pink RV water-safe antifreeze.

If there's still a sewage odor after you've run plenty of water or pink antifreeze down all the drains, or if you notice a sewage smell in a bathroom that gets regular use, you might want to check for leaks in or around the P-trap. If even a small amount of water has leaked out of the bottom of the "U," sewage gases may be able to sneak in. "If anything leaks, it would be noticeable," Patrick explains.

Another possible cause that's kind of gross, but fairly easy to resolve is a clog in the drain, since the clog itself can become smelly. Often, a plunger can take care of the clog, but if that doesn't work a plumber might have to use a drain snake or hydro-jetter to remove it. Sometimes, it's necessary to completely remove the P-trap to solve the issue [source: Wm. Henderson].

If the suggestions above don't lead you to the source of the sewage smell, you may be dealing with a more complicated issue. Keep reading to troubleshoot this troublesome issue. 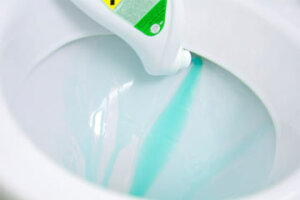 How to Get Hard Water Stains Out of Your Toilet

How to Keep Your Toilet Clean 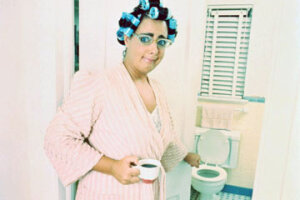