5 Tips to Keep Ants Away From Pets 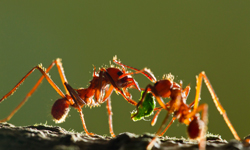 As anybody who's ever been to a picnic knows, ants like to get into food. The results are, well, yucky, but as bad as this problem can be for humans it can be worse for pets. Ants get into pet food too and pets may refuse to eat food with an ant colony climbing all over it. Worse, if ants actually get on your pet, they often bite, which can be an even nastier problem than you might think.

The most threatening kind of ants, both to pets and to humans, are fire ants. This term describes several different species that have invaded the southern half of the United States in recent years from other countries, having migrated roughly as far north as Maryland in the east and the northern tip of California in the west. Fire ants don't actually burst into flame (though it would be kind of cool if they did), but they do have venom and they can sting, something you don't want happening to your dog, cat, guinea pig, bird, potbellied pig or whatever sort of animal you share your life with. Heck, you don't even want this happening to yourself. Fire ants can be dangerous and if their venom creates an allergic reaction, it can be fatal.

Needless to say, you want to keep ants, especially the fiery kind, away from your pets. There are several ways you can do this. We'll talk about five over the next few pages.

Ants are outdoor creatures -- in theory, anyway. If you keep your pet indoors, they're a lot less likely to encounter the little six-legged fellows. Of course, not all pets like to stay indoors and many people prefer to let their cats and dogs hang out in the backyard. We won't make any judgments about that, but if you have a backyard pet, you might want to regularly police the yard for ant mounds and eradicate them when you find them. Poisons are available for exterminating ants or you can just call an exterminator. Just be sure that whatever process you use is pet-safe.

If fire ants should get on your outdoor pet (and you'll probably be alerted to this by loud noises of pain), remove them by hand or brush, not by hosing down your pet. Water just makes the ants angrier. (And wear gloves so that the ants don't get to you too.)

4: Don't Keep Loose Food in Your House (Or Near Your Pets) 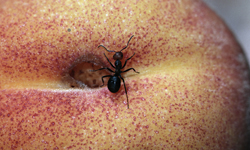 Maybe you don't have an outdoor pet. Alas, ants can still find their way into your house or apartment. The best way to deal with this problem is not to let it happen in the first place.

Ants, like humans, enjoy a good meal and they're always searching for food. When they find it, they tell their friends about it, and lay down a chemical trail inviting them to the party. To discourage ants from hanging around inside your house, especially the part of your house where your pets hang out, keep all food in sealed containers or in the fridge. Clean up any crumbs left behind after meals and snacks. (A pile of crumbs is like a grocery store to an ant, each crumb perfect for carrying back to the nest.) Get into the habit of moving used food to the trash or to the disposal unit in your sink as soon as possible. Take out the trash on a daily basis. That way, the ants may still get fed, but with any luck they'll be doing it away from your home -- and your pet. And be sure not to let your pet root around in the garbage. That's practically begging for an insect infestation!

3: Put a Moat Around Your Pet's Dinner

As much as you may try to remove loose food from your house, there's one place where you probably keep food in an open, unprotected container all the time: your pet's food bowl. Most pet owners leave food out so that their dogs, cats, rabbits, guinea pigs, etc., can enjoy a nutritious meal whenever they get the munchies. This is fine for you and for your pet, but it's absolute heaven for the lucky ant who stumbles into this treasure trove of edibles. Pretty soon they'll let their friends know about it and the ant feast will begin. Once the bowl is infested, your pet may simply refuse to eat from it -- or, worse, may also become infested with ants.

If this has become a problem at your house, there are specially designed food bowls with built-in "moats" -- essentially an inner bowl and an outer bowl separated by rings of water -- that will frustrate the ants. Your pet can lean over the moat to reach the food but ants drown if they try to cross the gap. Or you can make an ant-free cat bowl yourself by taking a pie tin, filling it with a shallow layer of water, then placing the cat bowl inside it, thus manufacturing your own moat. There are also ant barriers for sale covered with a sticky substance that the ants can't cross.

Unfortunately, pets can be messy eaters, and they may leave a lot of food outside the protective bowl, so be sure to clean it up as soon as possible.

2: Trap the Ants (Or Confuse Them) 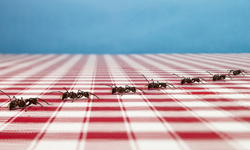 You know there's a formic acid trail in your house if you see a large number of ants following exactly the same path along walls and ceilings -- a path that usually terminates at a food source.
Chris Stein/Digital Vision/Getty Images

Once ants get indoors, plastic ant traps are available that contain a bait to lure the ants inside, where they eat a poison that isn't accessible to pets, children, overly curious adults, etc. Then they go off and die. But if the ants are still determined to make a -- you should excuse the expression -- beeline to your pet's bowl, you can literally throw them off the scent. When ants find a source of food, they lay down a trail of formic acid leading to the source. The formic acid is pretty much invisible to human beings, but to other ants it's like a road sign saying "Good eats this way!" You know there's a formic acid trail in your house if you see a large number of ants following exactly the same path along walls and ceilings -- a path that usually terminates at a food source.

So beat the ants at their own game. Scrub down the trail with soap and water to remove the formic acid trail. For extra ant confusion, take a little vinegar, which contains acid of its own, and coat the ant path with it. This renders any remaining formic acid difficult for the ants to detect and they'll no longer be able to find the source of the food. With luck, maybe they'll decide to move to the neighbor's house.

1: Armor Your Pet with Fipronil

Fipronil is a slow-acting ant poison that hasn't shown any toxicity in dogs and cats. Long range studies of its effects on human beings suggest that it's probably harmless, and it's used in several products, such as PetArmor and Frontline, that protect cats and dogs from ants. These products are widely available at pet stores and on the Internet.

Be careful before you use fipronil with pets other than cats and dogs, though. It can be fatal to rabbits, as well as to certain kinds of birds and reptiles. Although fipronil could turn out to be the ideal solution for your pet's ant problem, you should do research first on the product's effect on other types of animal -- especially if you have a bunny that likes to snuggle up with your kitten or puppy. Ants are a problem, but you don't want the solution to turn into an even bigger problem. 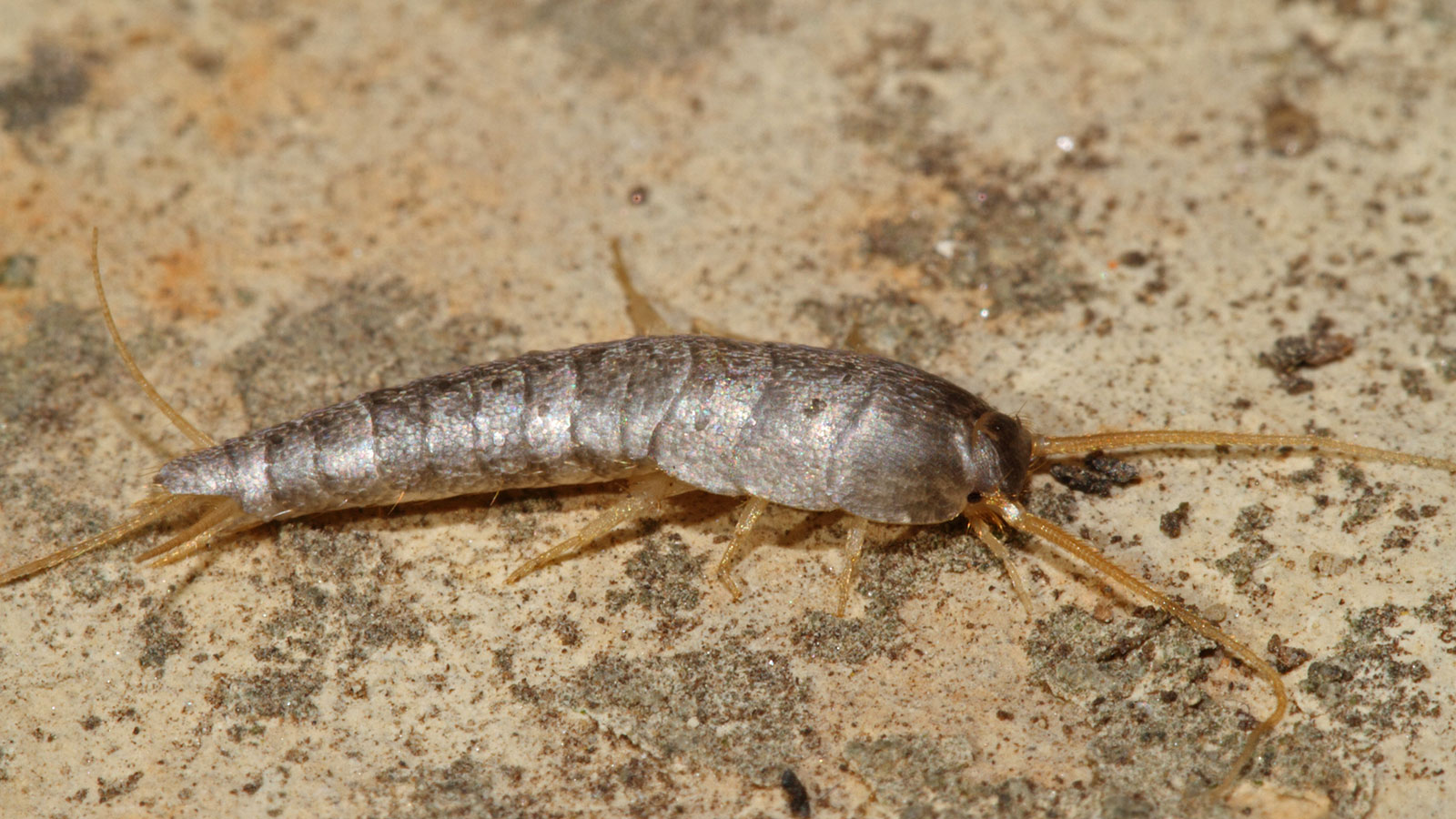 What Are Silverfish and How Do You Get Rid of Them?

You may have spotted these insects in your home. But are they bad to have around? And how do you get rid of them?

Author's Note: 5 Tips to Keep Ants Away from Pets

You'd think that, living in Southern California, my cats would have lots of problems with subtropical insects. Think again. It's such a dry area, even near the seashore, that there are much fewer insects here than I used to have to deal with when I lived on the east coast. The worst problem our cats have is fleas and for that we use periodic flea treatments. But ants aren't unknown in these parts and if ants ever invade our house and yard, I'm now armed with a set of tips for dealing with the problem and keeping the cats safe.

If we ever get fire ants, though, I'm buying a flame thrower. Just sayin'.