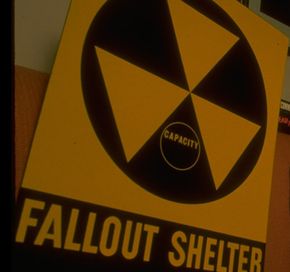 ­After the fall of the Berlin Wall in 1989 and the dissolution of the Soviet Union, the fear of all-out nuclear war between the United States and Russia mostly faded away. The Cold War had made American citizens constantly aware of the possibility of an attack, and each presidential administration brought new kinds of urgency to the matter. President John F. Kennedy, for instance, urged Congress to provide more than $100 million for the construction of public fallout shelters, and when he advised Americans to build their own bomb shelters, millions of families followed suit. But the easing of tensions between the two superpowers by the turn of the century seemed to erase the possibility of nuclear annihilation.

If you pay any attention to the news these days, however, you might think we're on the brink of another nuclear arms race. After surprising the world in 2006 by conducting underground nuclear tests, North Korea reluctantly dismantled its nuclear facilities in 2007. Iran resumed nuclear activities in 2005, and although reports suggest the country isn't close to building a bomb, it may be able to complete one between 2010 and 2015. And as of March 2008, the world's nuclear stockpile has yet to diminish -- the U.S. has a total of 9,938 nuclear warheads, while Russia has 20,000 [source: Global Politician].

As fears of nuclear disaster increase, so do the number of bomb shelters. In case of an attack, some people feel more comfortable with their own refuge that would protect them from the harmful effects of a nuclear explosion. Some people pay professional companies to build bomb shelters, many of which have state-of-the-art materials to withstand an attack and help­ those inside survive.

But what if you don't have the money to have someone build a bomb shelter for you? Or worse, what if you don't have any time? If a sudden warning or attack occurs, and there isn't a shelter nearby, is there anything you can do to protect yourself and others around you? In this article, we'll look at how a fallout shelter increases chances of survival during a nuclear attack.

The Dangers of Radiation Fallout 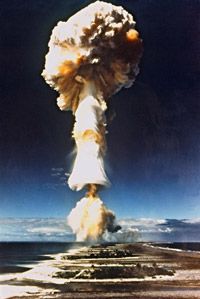 This photo taken in 1970 shows a French nuclear bomb test at Mururoa, French Polynesia. Researchers have established a link between France's nuclear tests over the Pacific Ocean in the late 1960s and the high incidence of thyroid cancer in Polynesia.
AFP/Getty Images

The first thing we'll look at is what happens during a nuclear explosion and the reasons why someone might build a bomb shelter or fallout shelter.

When a nuclear bomb is detonated, most of the immediate fatalities will be a result of the blast and the intense heat created from the explosion. The damage a bomb can cause varies greatly depending on its size, but a one-megaton hydrogen bomb, for example, would destroy every structure within about two miles of ground zero, and a person five miles away would receive third-degree burns.

Only a structure built to withstand about 50 pounds per square inch (psi) could survive close to ground zero, and the majority of it would most likely be underground. The material of such a shelter would have to very heavy and dense, like lead or concrete.

The lingering danger of a nuclear explosion, however, is the effect of nuclear radiation. This is something people outside of the immediate blast area would have to worry about -- radiation sickness can kill as many or more people than a blast would, but it would happen over a much longer period of time.

Gamma rays and neutrons are much more dangerous following a nuclear explosion. Neutrons are heavier than electrons, and when they break off of atoms from nuclear fuel, such as uranium or plutonium, act like extremely small "missiles" and can easily penetrate matter. Gamma rays are photons, very much like light, except they have more energy and can easily pass through several inches of a heavy element like lead.

When a nuclear bomb hits the ground, a crater is formed, and the earth that used to be there gets pounded into trillions of particles. These particles receive the radiation from the explosion and carry it up into the sky in a huge mushroom cloud. The cloud doesn't stay there or come back down to the ground -- wind pushes it along like any other cloud, and the particles drift down along the way. The dangerous material is actually visible, looking like sand or flakes, and coming into contact with large doses of it is life-threatening.

Using fallout shelters is the best way to protect people from falling radiation. See the next page to learn how they work. 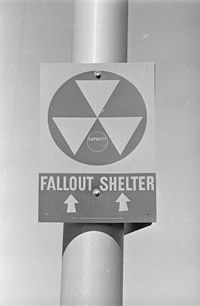 An SPF number refers to how much time you can spend out in the sun before getting burned. The PF number for a fallout shelter, though, represents the relationship between the amount of radiation an unprotected person would experience compared to the amount one would receive in a shelter. For example, a shelter with a PF of 5 would expose occupants to about 20 percent of the amount of radiation they'd receive if they were outdoors -- not a very safe number.

According to the Federal Emergency Management Agency (FEMA) pamphlet Standards for Fallout Shelters, a fallout shelter is "any room, structure or space designated as such and providing its occupants with protection at a minimum protection factor (PF) of 40 from fallout radiation resulting from a nuclear explosion" [source: SurvivalRing]. This means that the people inside would receive one-fortieth (or 2.5 percent) the amount of radiation they'd receive if they were outside after a nuclear explosion, which is much safer than a PF of 5.

A public shelter can be any kind of public building, including hospitals, schools and police stations. All public fallout shelters are marked with the universal sign for fallout shelters, which is a circle with three upside-down triangles inside (as seen in the first picture in this article). Public shelters usually have enough room to carry at least 50 people, but they can be big enough to provide protection for hundreds. A minimum of 10 square feet per occupant is required by FEMA, along with a minimum of 6.5 feet of head room.

Most government manuals recommend staying inside a fallout shelter for about two weeks. Although the amount of time it takes for radiation to disappear varies, from a few days to two weeks, most people take the "better safe than sorry" stance on this issue. Most are equipped with radiation detection devices and battery-powered radios to stay informed.

So what do people need in a fallout shelter? Although we're used to eating food on a regular basis, storing lots of food in a fallout shelter isn't the biggest concern. Humans can survive quite easily for two weeks without much food, but it's water that's important if people are going to stay underground for long periods of time. FEMA suggests a minimum of 3.5 gallons of drinking water per person to last the two weeks.

To learn what's necessary to build your own improvised bomb shelter, read the next page.

How to Build a Fallout Shelter 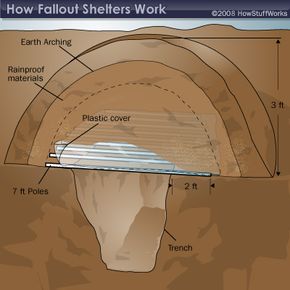 If a nuclear attack occurs far away and you aren't close to a private or public shelter, it's possible to build your own. One type of fallout shelter that can easily be made by a typical family in a short amount of time is a pole-covered trench. It's simply a hole in the ground covered by a roof of poles and a mound of earth. In the event of a nuclear attack, this general checklist of items would make building this type of fallout shelter much easier.

To begin, you should stake the outlines of your trench with shafts of wood. The shelter should be located at least 50 feet away from any large buildings, because nuclear explosions can cause far-reaching firestorms and damage structures well past ground zero. Once you have decided upon appropriate dimensions, start digging away earth and cutting poles to the appropriate length. The poles are placed across the trench, and their ends should extend at least two feet past the edges.

Cover any cracks between the logs with cloth or anything that will stop dirt from falling into the shelter. Two 6-foot poles, one placed onto top of the other and secured with rope, can be placed in front of the entrance to keep dirt from spilling in. One layer of earth, about a foot and a half deep, should go on top of the poles. The waterproofing material listed above goes on top of this first layer, and finally another foot and a half of earth is placed on top.

For lots more information on nuclear bombs, nuclear radiation and other things nuclear, see the next page. 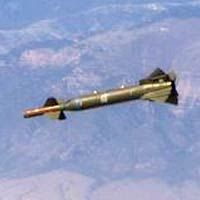 You May Like
How Bunker Busters Work
Explore More