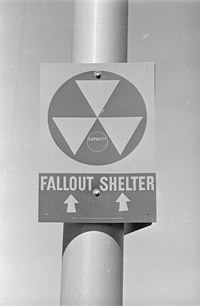 An SPF number refers to how much time you can spend out in the sun before getting burned. The PF number for a fallout shelter, though, represents the relationship between the amount of radiation an unprotected person would experience compared to the amount one would receive in a shelter. For example, a shelter with a PF of 5 would expose occupants to about 20 percent of the amount of radiation they'd receive if they were outdoors -- not a very safe number.

According to the Federal Emergency Management Agency (FEMA) pamphlet Standards for Fallout Shelters, a fallout shelter is "any room, structure or space designated as such and providing its occupants with protection at a minimum protection factor (PF) of 40 from fallout radiation resulting from a nuclear explosion" [source: SurvivalRing]. This means that the people inside would receive one-fortieth (or 2.5 percent) the amount of radiation they'd receive if they were outside after a nuclear explosion, which is much safer than a PF of 5.

A public shelter can be any kind of public building, including hospitals, schools and police stations. All public fallout shelters are marked with the universal sign for fallout shelters, which is a circle with three upside-down triangles inside (as seen in the first picture in this article). Public shelters usually have enough room to carry at least 50 people, but they can be big enough to provide protection for hundreds. A minimum of 10 square feet per occupant is required by FEMA, along with a minimum of 6.5 feet of head room.

Most government manuals recommend staying inside a fallout shelter for about two weeks. Although the amount of time it takes for radiation to disappear varies, from a few days to two weeks, most people take the "better safe than sorry" stance on this issue. Most are equipped with radiation detection devices and battery-powered radios to stay informed.

So what do people need in a fallout shelter? Although we're used to eating food on a regular basis, storing lots of food in a fallout shelter isn't the biggest concern. Humans can survive quite easily for two weeks without much food, but it's water that's important if people are going to stay underground for long periods of time. FEMA suggests a minimum of 3.5 gallons of drinking water per person to last the two weeks.

To learn what's necessary to build your own improvised bomb shelter, read the next page.