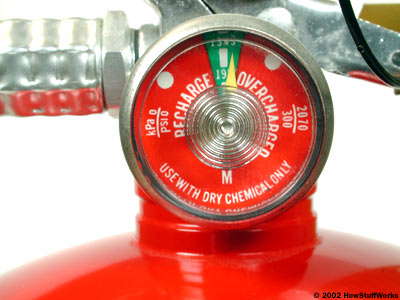 In the last section, we saw that there are three essential elements involved in producing fire -- heat, oxygen and fuel. To put a fire out, you need to effectively remove one of these elements.

Fire extinguishers are sturdy metal cylinders filled with water or a smothering material. When you depress a lever at the top of the cylinder, the material is expelled by high pressure, similar to the way material is forced out of an aerosol can. The diagram below shows a typical design.

In this extinguisher, a plastic siphon tube leads from the bottom of the fire-suppressant reservoir to the top of the extinguisher. A spring-mounted valve blocks the passageway from the siphon to the nozzle. At the top of the cylinder, there is a smaller cylinder filled with a compressed gas -- liquid carbon dioxide, for example. A release valve keeps the compressed gas from escaping.

To use the extinguisher, you pull out the safety pin and depress the operating lever. The lever pushes on an actuating rod, which presses the spring-mounted valve down to open up the passage to the nozzle. The bottom of the actuating rod has a sharp point, which pierces the gas cylinder release valve.

The compressed gas escapes, applying downward pressure on the fire-suppressant material. This drives the material up the siphon and out the nozzle with considerable force. The proper way to use the extinguisher is to aim it directly at the fuel, rather than the flames themselves, and move the stream with a sweeping motion.

In the next section, we'll look at the major types of extinguishers.