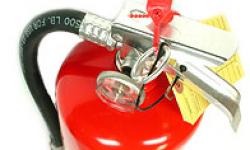 If you ask any firefighter what it takes to create a fire, you will learn that you have to have three things:

If you want to put out a fire, you need to remove one of the three elements. When you watch firefighters battling a forest fire, they generally try to remove fuel or heat. Either they pour water on the fire to reduce the temperature, or they try to bulldoze strips of bare earth to eliminate the fuel.

A carbon-dioxide fire extinguisher works by eliminating oxygen and replacing it with carbon dioxide. You could do the same thing with just about any non-oxidizing gas (nitrogen, for example), but carbon dioxide is inexpensive and easy to store.

Another way to cut off oxygen is to throw a blanket over the fire. Covering the fire with dirt or sand does the same thing. You might have heard that you can put out a kitchen fire by throwing baking soda or salt on the fire. Throwing sand would do the same thing, but most people have more salt in their kitchens than they have sand.

Dry chemical fire extinguishers are by far the most common fire extinguishers in the home. They can handle all three types of fires you would find in a kitchen or workshop: combustible solids like wood or paper, combustible liquids like gasoline or grease, and electrical fires. The idea behind a dry chemical fire extinguisher is to blanket the fuel with an inert solid (similar to dirt or sand). A dry chemical extinguisher sprays a very fine powder of sodium bicarbonate (NaHCO3, baking soda), potassium bicarbonate (KHCO3, nearly identical to baking soda), or monoammonium phosphate ((NH4)H2PO4). These solids coat the fuel and smother the fire.

Why would you throw a fire extinguisher?
10 Simple Ways to Discourage Break-ins
10 Must-haves in a Storm Survival Kit