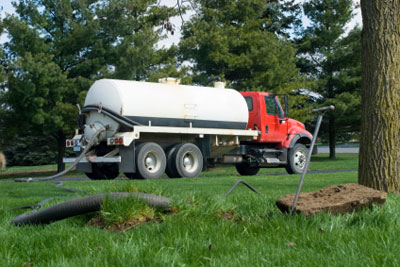 In modern homes, drains have a way of remaining innocuous. Unless the toilet's overflowing or the bath spigot is filling the tub with blood, plumbers and exorcists aren't usually on our minds. Thanks to the simple push of a lever, waste remains out of sight and out of mind. Not in this article. We're going to your backyard, to the greenest patch of grass, to dive headlong into your septic system.

About one-third of Americans have a septic system treating the waste in their homes [source: American Ground Water Trust]. By design, these systems are fairly simple. All drains in the home converge to a single pipe that leads to the septic tank buried outside. When the waste water from your toilet, shower, sinks and washing machine leave your house, it's combined. When it hits the septic tank, however, it begins to separate. The heaviest particulate matter in the waste, called sludge, sinks to the bottom. At the top of the tank, fats, oils and proteins form the floating scum layer. In the middle is the comparatively clear liquid layer called effluent or gray water. Combined, these components are called septage.

Septic systems are designed so that only the effluent is discharged from the tank into the drain field (also called the leach field). This is simply a set of pipes with holes drilled into them that release the effluent below ground (but above the water table). The effluent is degraded enough to be well-filtered by good soil. There's plenty of organic material left in the effluent, though, which acts as fertilizer. This is why the drain field usually boasts the healthiest segment of the yard above it.

Simple as their design may be, septic systems require the homeowner to monitor them before problems arise. Usually, once a problem becomes obvious, it's too late for any simple solution [source: Dymski]. Fixing big septic problems often requires thousands of dollars worth of parts and labor. Fortunately, a little maintenance can go a long way in avoiding problems. Read the next page to find out how often a septic tank should be pumped out. 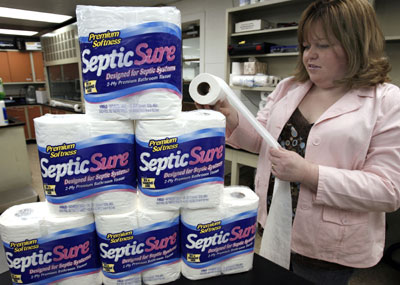 To help prevent clogging and build-up, some companies produce toilet paper that dissolves in water. It's helpful, but you should still have your tank inspected and pumped regularly.
Jeff T. Green/Getty Images

Even with a healthy microbial ecosystem breaking down the septage, a well-functioning septic system and good drain field, the sludge and scum layers in your tank will build up over time. The sludge and scum should be pumped out periodically -- generally when the bottom of the floating scum layer is within 6 inches (15.2 centimeters) of the outlet pipe or the top of the sunken sludge layer is within 12 inches (30.4 centimeters) of it [source: EPA]. Without a well-developed power of extrasensory perception, it's impossible to tell when your waste has reached these levels.

This is why it's recommended that people with a septic tank have their system checked every year [source: Seattle-King County Public Health Department]. Having your system inspected includes getting your sludge and scum levels measured, checking the system's pipes and mechanisms and inspecting the drain field to make sure it's percolating the effluent properly. The average septic tank system usually requires pumping every one to three years [source: EPA].

There are some products on the market that are meant to prolong periods between pumping. These products contain chemicals designed to hasten the process of breaking down the sludge in your tank by acting like tiny Pac-Men chomping magic pellets. At the least, products such as these may be superfluous: The additives are simply joining the microbial party already in full swing below your lawn. In the worst case, the chemicals can throw the primordial ecosystem that's developed over time in your septic tank thoroughly out of whack and disrupt the natural enzymes' ability to properly break down the waste sent to it. The Environmental Protection Agency (EPA) recommends that septic tank users play it safe and not substitute these products for regular septic tank inspections and pumping [source: EPA].

Without regular pumping of the septic tank, the system can overflow. Sometimes overflow can lead back to the house, where toilets and drains belch forth what's supposed to be in the septic tank. Overflow can also lead to a sudden deluge of unprocessed waste flooding the drain field. When this happens, water can seep above ground, which leads to a flooded yard and run-off into nearby water bodies like creeks and rivers. Below ground, this flood can cause further damage, tainting groundwater. Together, these intrusions of waste can contaminate the water people use and drink. The waste introduced into the water supply can carry harmful bacteria and diseases like hepatitis [source: EPA].

But even after it's taken from your backyard, your septic tank's contents still pose a hazard. So what happens to it? Read the next page to find out. 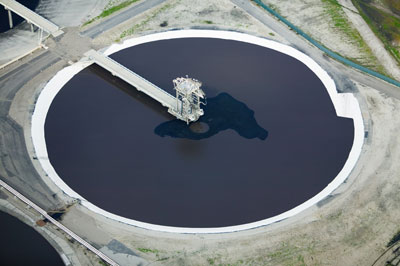