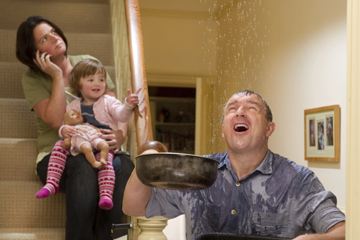 Water damage from burst pipes is the most common claim on homeowner's insurance.
struti/Vetta/Getty Images

Presidents Grant, Nixon and Carter slept here. So did President George H. W. Bush, a string of governors and other celebrities [source: Thayers Inn]. But the excitement surrounding their visits to Littleton, N.H.'s historic Thayers Inn probably paled in comparison to one of its more recent attention-getters.

On a Friday in January 2014, a waterfall erupted at the top of the inn's grand staircase, rivers appeared in hallways lining the 1843 structure's 39 guest rooms and lakes formed in its first floor parlors and restaurant.

A string of bitterly cold temperatures had caused a water pipe to burst in the building's attic, sending an estimated 500 gallons (1,900 liters) gushing for every minute the break remained unchecked. It took 10 to 15 minutes to turn the water off, resulting in enough leaked liquid to fill a residential swimming pool. Ceilings collapsed, wood floors buckled and antique furniture warped [source: Sullivan].

Burst pipe disasters like this are compounded by ongoing (and potentially expensive) problems, including deep structural damage and mold growth. Even a hairline crack in a water pipe can release up to 250 gallons (950 liters) of water a day.

So how do you know if your home's pipes are frozen and creating a disaster just waiting to happen? The answer to this is surprisingly simple: If you turn on the water faucet and water does not come out -- or if you flush a toilet and it does not refill -- your water pipes are probably frozen. Alternatively, if you turn on a faucet full strength and only a trickle is released, this could also be a sign the water pipes are blocked by ice. If you suspect a water pipe is frozen, it's time to call a plumber and turn off the water where the main line enters your home [source: House Logic].

Of course, this advice usually only applies to areas in which temperatures have dropped near or below freezing (32 F or 0 C). As a general rule, temperatures below 20 degrees Fahrenheit (minus 7 degrees Celsius) put water in pipes at risk for freezing. However, once the wind chill is factored in, water pipes could potentially freeze above the 20 degree Fahrenheit mark, too [source: The Weather Channel]. 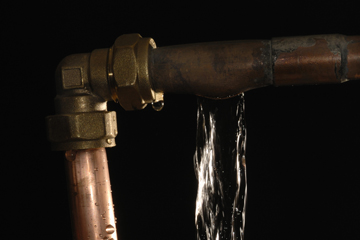 In colder regions of the U.S., most homes are built so the water pipes are protected from the elements. Insulated water pipes are placed in heated, interior areas of a home, steering clear of unheated attics, crawl spaces and exterior walls. In warmer regions of the U.S., homeowners aren't always as fortunate. Freezing is rare, which leads to less attention to water pipe insulation and placement during construction. During a cold snap, this could translate into a frozen -- and then watery -- mess [source: The Weather Channel].

What's the best way to prevent frozen water pipes, wherever you live?

If you're right in the middle of a cold snap, there are few additional precautions you can take, too.

The most common claim on homeowner's insurance? Unfortunately, it's water damage from burst pipes, a catastrophe that averages about $5,000 a claim [source: House Logic].

Author's Note: What causes pipes to burst when they freeze?

We have some family friends who just spent five weeks without the use of their kitchen because of a burst water pipe. They waited and watched as new floors, cabinets and appliances were installed -- and begrudgingly took their baby and toddler to dine out for nearly every meal. The expense, she said, was astounding. And the food choices were more limited than my friend expected, especially for someone who leans toward an organic, whole food diet. I can't imagine ushering young children to a restaurant every day. It's challenging enough while on vacation. Fitting into a daily routine would be exhausting, don't you think?

Does One Dripping Faucet Really Prevent Frozen Pipes?
How To Fix Pipes
How to Repair Plumbing Pipes

How To Repair Oil Furnaces
Is there a way to keep floodwaters out of my house?
Faux Stucco Wall Treatment