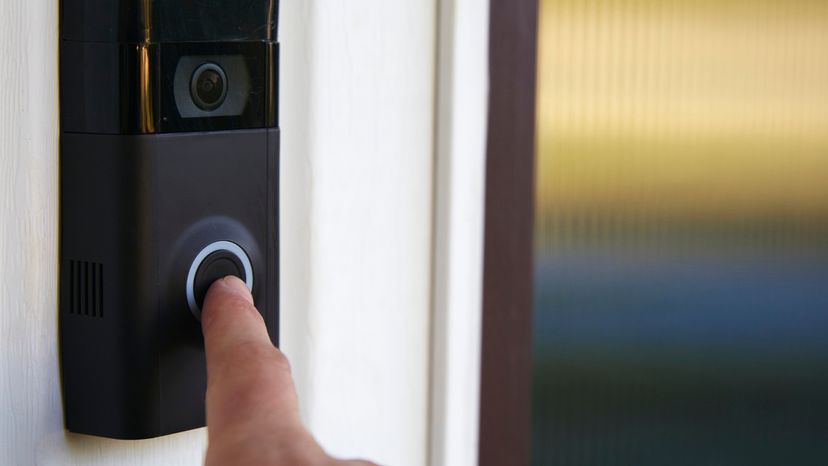 ­Doorbells are one of those everyday devices we take for granted. On the surface, they couldn't be simpler: You press a button, which completes a circuit, which turns on some sort of noisemaker. In a world full of computers, cars and televisions, that doesn't seem so impressive.

But when you take off the cover and see what's going on, conventional doorbells are one of the coolest machines around, precisely because of their simplicity. Doorbells put the basic principle of electromagnetism to work in remarkable, innovative ways. In this article, we'll look inside some standard doorbells to see how these devices translate electric current into buzzes, rings and chimes.

Electromagnets work on a very simple principle. Running electrical current through wire creates a very small magnetic field around the wire. Coiling the wire amplifies this magnetic field, so it has a substantial effect on any magnetic objects around it.

The magnetic field of the electromagnet is put to work to drive some sort of a noisemaking apparatus. There are a number of different ways to configure the doorbell components in order to produce different sorts of noises. In the next couple of sections, we'll look at three common systems: the buzzer, the bell and the chime. 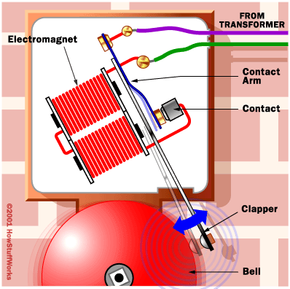 A standard bell ringer design works just like a buzzer except the contact arm is attached to a long clapper that hits a metal bell.

As we saw in the last section, an electromagnet consists of a single length of wire wrapped in a coil. In a buzzer, the simplest sort of doorbell, an electromagnet is used to operate a self-interrupting circuit.

Closing the doorbell circuit (by pressing the button) puts this mechanism in motion. Initially, the electromagnetic field attracts the iron bar, which pulls the contact arm off the stationary metal contact. This breaks the connection between the circuit and electromagnet, so the electromagnet shuts off.

Without a magnetic field pulling it back, the contact arm snaps back into position against the stationary contact. This reestablishes the connection between the electromagnet and the circuit, and the current can flow through it again. The magnetic field draws the contact arm up, and the process repeats itself as long as you hold down the buzzer button. In this way, the electromagnet keeps shutting itself on and off.

The buzzing noise you hear is the sound of the rapidly moving arm hitting the magnet and the stationary contact dozens of times a second.

A bell system works on exactly the same idea, except the moving arm is attached to a long clapper, which rests alongside a circular bell. As the arm moves back and forth, the clapper hits the bell repeatedly. This is the same system used in old-fashioned fire alarms and school bells.

These days, most people don't have buzzers or bells in their homes. The standard doorbell design today makes a softer chiming sound. In the next section, we'll see how this system works. 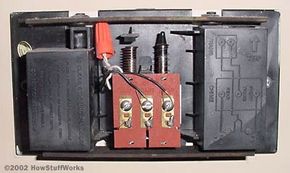 This doorbell has two solenoids, each wired to a different ringer button. One solenoid hits two tone bars, while the other hits only one.

A chime doorbell uses a specialized sort of electromagnet called a solenoid. A solenoid is just an electromagnet where the coiled wire surrounds a metal piston. The piston contains magnetically conductive metal, so it can be moved backward or forward by the electromagnetic field.

In many instances, the solenoid piston consists of an iron core mounted to a non-magnetic metal bar. When there is no power to the electromagnet, a spring pushes the piston to the left, and the iron core extends outside of the wire coil. When you turn the electromagnet on (by pressing the doorbell button), the iron core is drawn to the magnetic field, so it slides into the center of the coiled wire.

As the iron core slides to the right, the end of the piston strikes the right-hand tone bar. The tone bar vibrates, producing a particular note. This is the "ding" sound.

As long as you hold the doorbell button, current will flow through the electromagnet and the piston will remain in this position. But when you release the button, the current will stop flowing through the electromagnet and the magnetic field will collapse. The spring snaps the piston back to the left, where it hits the tone bar on the other side. The second tone bar produces the "dong" sound.

You can make more elaborate tone sequences by adding more solenoids and tone bars. Some variations on this design produce a different tone pattern when someone rings the back doorbell than when someone rings the front doorbell. Each doorbell button closes a separate circuit, connected to separate solenoids in the doorbell mechanism. In the simplest design, one of the solenoids hits a bumper instead of the second tone bar. In this way, one doorbell button will trigger a "ding-dong" tone and the other button will trigger only a "ding" tone.

Electronic doorbells are growing in popularity, but most homes still use conventional electromagnet doorbells. This classic design may not play elaborate songs or messages, but it is so simple and sturdy that it should be around for a long time to come.

For more information on doorbells, including tips for repairing a broken doorbell mechanism, check out the links on the next page.