How do washing machines get clothes clean?

by Stephanie Crawford
NEXT PAGE 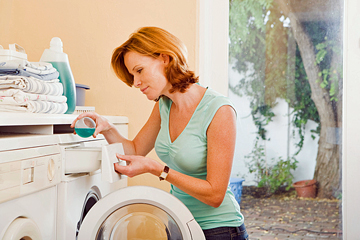 Today's washing machines automate just about anything you need to do to your laundry, but how do they actually get clothes clean?
Jupiterimages/Pixland/Thinkstock

One of the first things people notice about you is what you're wearing. This doesn't just mean the style and fit of your clothes, but also how clean and new, or dirty and worn those clothes are. Because our clothes are so important to us, we put a lot of energy into keeping them clean.

The most common way we clean our clothes and linens is wet cleaning, or the use of water and some type of soap. In contrast, dry cleaning uses chemicals or ultrasonic devices to loosen and remove dirt and stains without water. While dry cleaning is usually done at professional dry cleaners' shops, wet cleaning is usually done at home or at a self-service laundromat. The washing machine itself has become a major part of setting up a home, and doing laundry is probably part of a regular routine for you and your family.

We've come a long way in automating the chore of doing laundry. The Union Washing Machine was patented in 1860 and consisted of a hand-cranked device that rubbed clothes between two washboards inside a bin of boiling water and soap. The Union Wringer was patented two years later and attached to the washing machine as a means of wringing out clothes when they were finished washing. This design was one of many similar inventions in the 19th century that were dubbed "washing machines" long before they even used electricity [source: Van Name & Co.]

Today's washing machines work with the same principle as these original washing machines: Loosen dirt from clothes and linens with soap and water, rinse and squeeze out as much water as possible. Modern washing machines, though, are almost completely automated. They've had electric motors doing the hard work since the early 20th century, and there's a good chance you've never used a washing machine without a built-in spin cycle.

So what are washing machines actually doing to get the laundry clean? This article answers that question, including the basic mechanics behind modern machines, the various cycles the machine uses to clean clothes, and the important differences between top-loading, front-loading and high-efficiency washers.