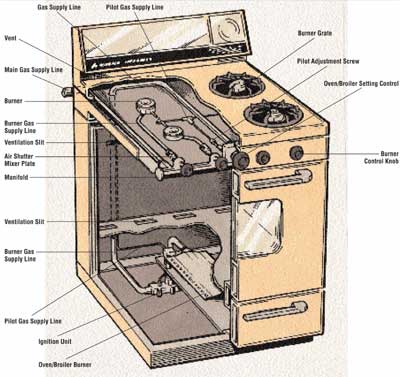 Gas ranges and ovens use gas burners to heat and cook food. Most malfunctions involve the supply and ignition of gas in the burners.
©2006 Publications International, Ltd.

Step 2: Remove the back service panel on the control panel by backing out a series of screws around the edge of the panel. To remove the front panel, take off the control knobs and remove a series of mounting screws that hold the decorative panel to the frame. These screws may be hidden by molding or trim; pry off the molding or trim with a screwdriver, or take out several screws.

Step 3: To gain access to the burner assemblies, remove the burner grates and then the top of the range. The entire range top should either lift up and off the range or open up and back on hinges. The oven door can usually be removed by pulling it straight up off the hinges on both sides of the door. Some hinges have a latch that must be unlocked before the door can be removed.

Step 4: If the surface light of the range burns out, remove retaining screws and panels as necessary to gain access to the bulb. Replace the burned-out bulb with a new one of the same type and wattage; check the ends of the old bulb for this information. Then replace any retaining panels.

Step 5: If the oven light burns out, unscrew it and remove it from the oven. Replace the burned-out bulb with a new one of the same wattage, made for oven use.