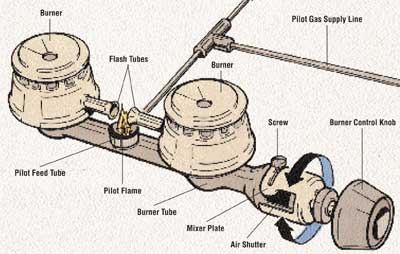 The flame of a gas range burner should be steady and slightly rounded, with a light-blue tip. To adjust the flame, slide the air shutter mixer plate open or closed.
©2006 Publications International, Ltd.

The flame of gas range burners should be steady and slightly rounded, with a light-blue tip. The flame should be quiet and should respond to adjustments made at the control knobs. Most burner troubles can be quickly solved by adjusting the air shutter mixer plate, which is located at the end of the burner tube near the knob controls. Turn a small screw on the plate, slide the plate open or closed, and tighten the setscrew.

The oven pilot is usually located at the back of the oven; turn a screw on the pilot ignition unit to adjust the pilot flame height.
©2006 Publications International, Ltd.

One pilot light usually serves all the top burners of a gas range. Some ranges have two pilot lights, one for each side of the range. A correctly adjusted pilot flame is steady and blue, between 1/4 and 1/2 inch high. If the flame goes out repeatedly, or if it's yellow at the tip, it's getting too little air. If there's a space between the flame and the pilot feed tube, it's getting too much air. To correct either condition, turn the pilot adjustment screw on the gas line slightly, as directed by the manufacturer of the range.

Most modern gas ranges use an electronic pilot igniter to start the pilot.

If the pilot flame is properly adjusted, but the flame doesn't ignite the burners, the problem is probably in the flash tubes that run from the pilot to the burners. These tubes may be blocked by spilled food from the burners. If this is the case, turn off the power to the range and clean out the tubes using a short piece of wire. Push the wire through the opening until the tube is clear. You may have to disconnect the tube to clear it. After cleaning the tube, replace it in the same position.

If the pilot has a switch, the switch may be faulty. Turn off the power to the range and test the switch with a volt-ohm-milliammeter (VOM) set to the RX1 scale. Remove the retaining screws that hold the switch in the range cabinet, and disconnect both electrical lead wires to the switch. Clip one probe of the VOM to each switch terminal. If the switch is functioning, the meter will register zero. If the meter reads higher than zero, the switch is faulty and should be replaced. Remove the switch and replace it with a new one of the same type. Connect the new switch the same way the old one was connected.

Most newer gas ranges and ovens don't have pilot lights. Instead, the gas is ignited by an electric ignition system. In this type of system, an element becomes hot and glows like the filament in a lightbulb when an electric current passes through it. The heat from the filament lights the gas. As a rule, these ignition systems are sealed and cannot be repaired or adjusted. When an electric ignition device fails, don't try to fix it. Call a professional service person for replacement.

If the flame is set too low, adjust it. Next to the pilot, locate a small boxlike unit with a couple of screws in it. This is the ignition unit. The ignition unit could also be located below the pilot; follow the gas line down until you locate it. Turn one of the screws on the ignition. Experiment, turning the screws a little at a time, until the flame is adjusted properly. It should not be as high as the top pilot flame; leave it as low as possible. On some oven pilots, turn the control to the OFF position and light the pilot; then turn the oven dial to the BROIL position. The pilot will heat the controls to the ignition switch.

On some ranges, there is an automatic shutoff valve located in the pilot assembly that shuts off the gas to the burner any time the pilot and the burner are both off. If this unit malfunctions, don't try to fix it yourself; you should call a professional service person for repair or replacement.An electrically operated shutoff valve used on some gas ranges has two facing valves, an electromagnet, and a manually activated reset button. The thermocouple fitting is next to the pilot valve, as in most burner systems. A small amount of electricity holds the facing valves apart. If the pilot light goes out, no electricity is generated, and the valve closes to turn the gas off. On this type of system, relight the pilot by depressing the reset button and holding a match to the pilot. It should take about a minute to light this pilot. If you aren't able to relight this system, call a professional service person.Electric ovens and ranges are growing in popularity, probably because most repairs involve simply replacing a worn or faulty part. Learn more about how to provide routine maintenance for an electric range in the next section.

How to Troubleshoot Self-cleaning Ovens

There are two types of self-cleaning ovens, pyrolytic and catalytic. Pyrolytic ovens use very high heat -- usually 1,000 degrees Farenheit -- to incinerate food on the oven's surface, leaving only a fine ash. The smoke produced by the burning is vented from the oven. When the cleaning process is complete, the fine ash left in the oven can be wiped off the surface.

Catalytic self-cleaning ovens are coated with a special finish the allows most dirt to burn away at normal cooking temperatures. With these ovens, major food spills and spatters must be cleaned away immediately or the special finish will not work.

Caution: Never use a commercial oven cleaner to clean either a catalytic or a pyrolytic oven.

Most problems with pyrolytic ovens occur because procedures are not properly carried out. In most cases, the oven heat selector must be set to the CLEAN position, and the oven door must be firmly closed and sometimes latched. When the oven reaches a predetermined temperature -- about 600 degrees Farenheit -- the door automatically locks shut so that it can't be opened during the cleaning cycle.

If you've followed the correct procedures for using a self-cleaning oven, but the oven is not coming clean, call a professional service person. Before you call, though, make these basic checks: