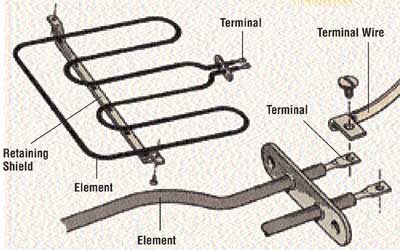 To remove an oven or broiler heating element, remove the screws or pull the plugs that connect it. Remove a retaining shield and lift out the element.
©2006 Publications International, Ltd.

Electric oven and broiler elements are often even easier to test and replace than range elements. Here's how:

Step 1: If the oven element doesn't work, first check to see if the range is receiving power. Don't overlook the fusing system inside the range.

Step 2: If the range is receiving power, set the timer on the range to the MANUAL position.

Step 3: If the element still doesn't heat, turn off the power to the range and test it with a VOM set to the RX1 scale.

Oven and broiler elements cannot be tested without a VOM. If you don't have a VOM, take the element to a professional service person for testing. The problem is usually a malfunctioning element; however, you aren't risking much by replacing the element without a professional test.

Step 6: Take the burned out element with you to the appliance-parts store to make sure you get the right replacement part; if possible, take the make and model information, too.

To install the new element, place it in the same position as the old one. Connect it the same way the old one was connected, using the same screws to hold it in place. Just about all the other components of an electric range or oven (including its door gasket, oven controls, and timer) are virtually the same as the components used on gas ranges.

Most problems with gas and electric ovens or ranges are easier to fix than you think. The key is knowing how the various parts work and when to replace them.