How to Repair Kitchen Equipment

How to Sharpen Knives 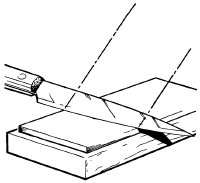 Holding the knife at the angle of the cutting bevel, stroke it firmly across the stone. Sharpen both edges.

Even the best steel dulls eventually, and inexpensive knives and scissors are usually not too sharp to start with. Keep fine steels sharp and salvage dulled blades with periodic honing.

Buy a whetstone with one coarse and one fine side. To prepare the stone for use, put it in a deep pan and cover it with household or light machine oil; let it soak overnight. Remove any dirt or loose particles with a soft cloth soaked in mineral spirits. Between uses, store the prepared whetstone in a box with a lid or a sealable plastic bag.

To sharpen a very dull knife, use first the coarse and then the fine side of the whetstone; to sharpen a blade in better shape, use only the fine side. Have badly chipped or serrated knives professionally sharpened.

Oil the surface of the whetstone lightly. If you can see the cutting bevel on the knife blade, keep the knife at this bevel as you work; otherwise, hold the knife with the blade at a 30-degree angle to the stone.

Holding the knife blade firmly at the bevel angle, push the full length of the blade gently but firmly away from you, at a diagonal across the stone. Lift the knife blade at the end of the stroke, turn the knife over, and repeat, stroking the blade away from yourself across the stone. Repeat, using alternating strokes on the two sides of the blade, for the same number of strokes on each side. These alternating strokes remove any tiny burrs caused by the sharpening. For very dull blades, follow this sharpening procedure on first the coarse side and then the fine side of the stone. Remove debris from the knife blade with a soft cloth.

Sharpen carving knives with a fine-grit slipstone, making circular strokes along the edge at the cutting bevel.

To sharpen carving knives and other fine stainless steel blades, use a fine-grit silicon carbide slipstone instead of the whetstone. Holding the slipstone at the proper bevel angle to the knife blade, whet the cutting edge of the knife with tight circular passes of the stone. Whet both sides of the blade alternately to keep the cutting edge even.

Sharpen scissors on a lightly oiled whetstone, maintaining the existing bevel on the outside edge of each blade. Unless a scissors is very dull, use only the fine side of the whetstone. Don't try to sharpen pinking shears; have them taken care of professionally.

Open the scissors wide, and set the outside beveled face of one blade flat on the whetstone. Angle the blade back at a slight diagonal. Holding the scissors firmly, stroke the blade firmly but gently away from you, at a diagonal across the stone; stroke from handle to tip of the blade. Lift the scissors at the end of the stroke, and repeat, working only on the beveled side of the blade, to produce an even cutting edge. Wipe the blade clean with a soft cloth; then sharpen the other blade of the scissors the same way.