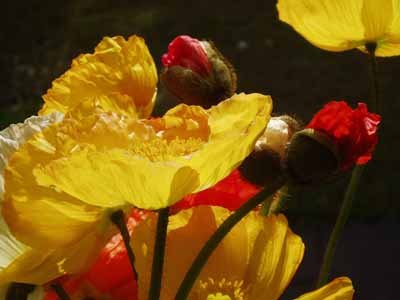 The thin petals of Iceland poppies, a See more pictures of annual flowers.

Iceland poppies have glistening, translucent flowers, which are a glowing sight when backlit by the sun. The petals look like tissue paper or crinkled silk. Their spring and early summer splendor in warm parts of the country can be enjoyed throughout the summer in cooler climates. They're short lived perennials that are best started fresh each year.

Description of Iceland poppy: A rosette of thin, narrow leaves forms the base. The tall, slender stems are topped by flowers virtually in all colors of the rainbow but blue, with many hues in between. The ring of prominent yellow stamens enhances the colorful blooms. Stem height varies widely from 1 to 2 feet. There are semi-double forms as well.

Growing Iceland poppy: Iceland poppies prefer full sun and a fertile, well-drained soil; otherwise, their requirements are not demanding. Early flowers during cool weather will be the largest. To encourage continued flowering, remove seed heads when they form.

Propagating Iceland poppy: By seed. Seeds sown indoors in January will bloom the first season. Plants may also be started the previous summer and overwintered in the garden. In mild winter areas, bloom can start in the winter. Seeds germinate in 10 to 15 days at 55 degrees Fahrenheit. Poppies are tap-rooted plants that do not transplant easily once the tap root is formed. Grow in peat pots and transplant into the garden, pot and all.

Uses for Iceland poppy: A whole bed of poppies is spectacular. They can also be grown as clumps, groups, or ribbons of plants in mid-border. They're especially beautiful backed by the foliage of hedges or other green plants. They also make good cut flowers. Cut the flowers in early morning just as the buds are showing color, sear the cut ends in an open flame or plunge the stems in hot (not boiling) water for a few moments.

Iceland poppy related species: Papaver rhoeas, the Shirley poppy, is the cultivated form of the Flanders poppy, a deep scarlet with black centers. There are many new forms including doubles in pink, white, rose, salmon, as well as red. Mother of Pearl is a selection of pastel shades including gray, blue, lilac, dusty pink, and bicolors.