Browse the article How Aquaponics Works 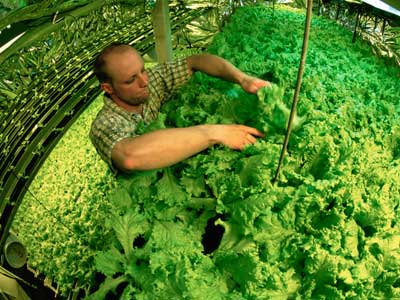 They say one person's trash is another's treasure. The day-old bagels a franchise views as too stale for customers taste perfectly delicious to the hungry when they're distributed at a homeless shelter. The annoying, hyperactive puppy one family abandons at the dog pound because it chews shoes becomes another family's rambunctious little delight. What one group sheds as waste, another takes in as nourishment. It's a lovely circle.

With aquaponics, this same circle is turning -- only it doesn't have anything to do with bagels or puppies. Aquaponics is a method of cultivating both crops and fish in a controlled environment. The fish are kept in tanks, and the plants are grown hydroponically -- meaning without soil. They sit in beds, but their roots hang down into a tub of water. When fish live in tanks, their waste builds up in the water, and it eventually becomes poisonous to them. But what is toxic for fish is nourishing for plants -- they love nothing more than to suck down some fish waste. So with aquaponics, the fish waste-laden water from the fish tanks is funneled to the tubs where the plants dangle their roots. When the plants absorb the nutrients they need from that water, they basically cleanse it of toxins for the fish. Then that same cleansed water can be funneled back into the fish tanks.

This method of farming fish and crops is a good thing on several different levels. First of all, it removes fertilizer and chemicals from the agricultural process. The fish waste acts as a natural fertilizer for the crops, instead. Second of all, it saves water because the water is recycled within the tanks rather than sprayed across a field of crops with abandon. Thirdly, an aquaponics environment can be set up anywhere, so it reduces the need for local communities to import fish and crops from other countries. That saves fuel -- also a positive.

­Aquaponics, with its fancy name, may sound like a trendy new concept developed by environmentalists. But it's actually as old as the hills. The origins of aquaponics can be traced to ancient Egyptian and Aztec cultures. The ancient Aztecs developed chinampas, man-made floating islands, which consisted of rectangular areas of fertile land on lake beds. Aztecs cultivated maize, squas­h and other plants on the chinampas and fish in the canals surrounding them. The fish waste settled on the bottom of the canals, and the Aztecs collected the waste to use as fertilizer [source: Growfish]. Additionally, countries in the Far East like Thailand and China have long used aquaponic techniques in rice paddies.

Let's learn how this ancient farming method is applied today. 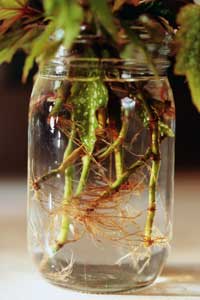 It might seem strange, but plants can thrive without soil.
Shannon Fagan/Getty Images

Cultivating plants and fish through aquaponics is both easy on the environment and easy on finances. Aquaponic systems don't use any chemicals, and they require about 10 percent of the water used in regular farming. The systems are closed -- that is, once they've been filled with water, only a small amount is introduced into the system thereafter to replace evaporated water. But how can a water-based system use less water than conventional farming?

The answer is the continual reuse and recycling of water through naturally occurring biological processes. Basically, the waste from fish produces natural bacteria that converts waste like ammonia into nitrate. This nitrate is then absorbed by plants as a source of nutrients. The basic principle of aquaponics is to put waste to use.

Let's take a look at the step-by-step process:

Because fish waste is used as fertilizer, there's no need for chemical fertilizers. The money and energy it would take to put those chemicals to work is saved. In fact, the only conventional farming method that's used to operate an aquaponics system is feeding the fish.

Now you know how aquaponics works on a biochemical level. But which kinds of fish are best for these systems? And which plants thrive in them? Let's find out. 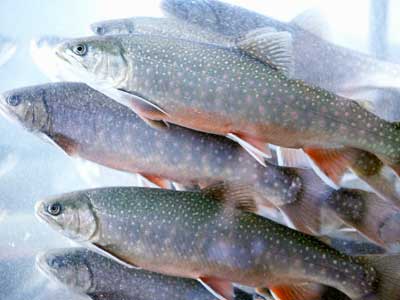 Many warm-water and cold-water fish species have been adapted to aquaponics systems. The most commonly cultivated fish in aquaponics systems are tilapia, cod, trout, perch, Arctic char and bass. But out of all of these, tilapia thrives best. Tilapia are very tolerant of fluctuating water conditions, such as changes in pH, temperature, oxygen and dissolved solids. They also are in high demand -- this white-fleshed fish is frequently sold in markets and restaurants.

Plants yielding fruit have higher nutritional requirements, and although they grow well in aquaponics systems, they need to be placed in systems that are heavily stocked and well established. Vegetables like bell peppers, cucumbers and tomatoes can be cultivated in these types of aquaponics systems. The only plants that don't seem to respond as well are root crops like potatoes and carrots. Without soil, these crops wind up misshapen, and they're hard to harvest properly.

Aside from plants and fish, the other major component of aquaponics is the water itself. That said, carefully monitoring the water's pH, which determines acidity, is of the upmost importance to ensure safe levels for the fish. Water quality testing equipment is very important to ensure that both fish and plants remain healthy. It's also important to keep an eye on dissolved oxygen, carbon dioxide, ammonia, nitrate, nitrite and chlorine. The density of the fish in the tanks, the growth rate of the fish and the amount of feed they're given can produce rapid changes in water quality, so careful monitoring is important. Although the ratio of fish tank water to hydroponic product depends on fish species, fish density, plant species and other factors, a general rule of thumb is a ratio of 1:4 tank contents to bed contents. Basically, for every one part of water and fish, you'll want to have four parts plant and bed material.

Some aquaponics systems are outfitted with biofilters, living materials that naturally filter pollutants out of water and that facilitate the conversion of ammonia and other waste products. Other systems feed fish waste directly into the hydroponic vegetable beds. Gravel in the vegetable bed acts has a bioreactor, a material that helps carry out the chemical processes of living organisms. The gravel does this by both removing dissolved solids and providing a place for the nitrifying bacteria to convert into plant nutrients.

Want to bring food production into your backyard? Read on to learn how to set up your own aquaponics system. 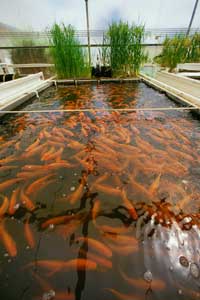 Aquaponic systems are definitely a force on the larger industrial and commercial food production scene. But in reality anyone can implement aquaponics basics into their backyard gardening. Whether you set up a system on your patio, your apartment roof or in your backyard, a properly operating aquaponics system can provide food for an entire family.

What basics will you need to get started and bring food production into your own backyard? The actual set up of your system will vary greatly depending its size and the space where you're setting it up, but here are some of the essentials:

On both a small and large scale, aquaponics definitely offers an environmentally beneficial way to cultivate fish and plants. For more information on other plant and garden concepts, visit the links on the following page.