How to Build a Rock Garden

Browse the article How to Build a Rock Garden 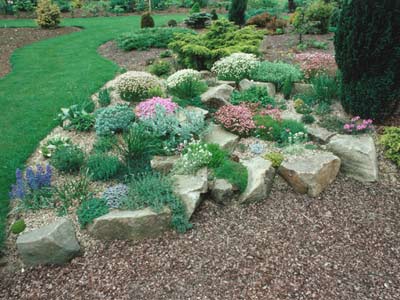 ­Few are able to deny the magnetism that rock gardens have. If you've never seen one, a rock garden is simply a plot with a mix of rocks and any of several special species of small flowers. Some would say that because rocks are permanent, solid and rugged, they complement t­he delicacy of flowers. The Japanese recognized the calming and meditative effect of rock arrangement as far back as the medieval era when they developed the Zen garden. Fortunately, forging a beautiful and relaxing rock garden in your yard is surprisingly simple.

If you're still on the fence about whether you want to take the time to build a rock garden, consider that this small time investment will pay off in spades. That's because rock gardens can turn grassy areas and awkward, difficult-to-mow slopes into a low-maintenance landscape. In other words, when you're done landscaping, you can just step back and enjoy your garden. You'll probably have no harder labor ahead of you than occasional light watering or perhaps removing a weed or two.

­When you've learned just a few tricks of the trade, you can create an effective rock garden that seamlessly blends into your landscape. Consider how other kinds of gardens, such as vegetable gardens, can look obviously cultivated ­and artificial. On the other hand, a well-designed rock garden evokes a sense that Mother Nature has courteously bestowed some her best work on your land, to the envy of all the other lawns. In addition, rock gardens provide the ideal place to showcase the small, delicate and understated flowers that get overshadowed in other gardens.

If you happen to have a gentle slope in your yard that gets plenty of sun, this is the perfect place to build a natural-looking rock garden. If you aren't so lucky, however, you still have plenty of options. Take note that sometimes different rules apply to varying climates and soils, too, but we'll lend tips when these exceptions might crop up. Next, we'll dig into what makes a proper rock garden foundation.

The Dirt: Laying the Foundation for a Rock Garden 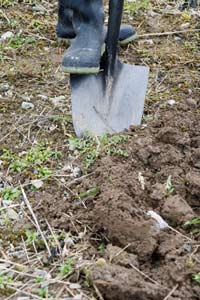 To give your rock garden a proper foundation, first dig out a plot so that you can put down a drainage layer.
©iStockphoto/Oktay Ortakcioglu

­A good foundation is everything. Even if you have the ideal natural slope for building a rock garden, experts advise taking the time to dig up the area to put in a proper foundation. That's because most rock garden plants need soil to be at once water-retentive and quick-draining [source: Ward].

Step One: Excavate. Choose the exact site of your rock garden, and section it off with posts and string. Preferably, you should dig the foundation on a day when the soil seems relatively dry. Dig down at least 1 foot (30.48 centimeters), and get ­rid of all remaining weeds and roots (which may require some heavy-duty weed-killer) [source: Hessayon].

If you don't have a natural slope on which to build your garden, you may choose instead to build a raised bed, which is an elevated plot upheld by walls. Experts recommend digging down about three feet (91.44 centimeters) for a raised bed [source: Ward]. You can fill in the foundation layers as you build the walls, which can be made of brick or concrete. For a more rustic look, you can construct mortarless walls out of limestone or sandstone. The higher the walls, the more likely you'll deter pets from treading on your delicate flowers.

Another option for planting a rock garden on flat land is to pile up your own mound, known as a berm. One advantage of a berm is that it slopes down naturally at all sides, promoting drainage. This is helpful if you're including a variety of plants in your garden, some of which need more water than others. You can plant those near the bottom of the berm's slope and the ones that require less water near the top of the mound [source: McGary].

Step Two: Put down the drainage layer. The first layer of your foundation absorbs excess moisture from the soil above it. To this end, experts recommend throwing in a hodgepodge of clunky rocks, old pieces of concrete or brick and even broken pieces of clay pots. Pack this layer in evenly to make up about one-third to one-half of your trench's depth. (Note: This step may not be necessary if you're building on a slope with light, dry, nonclumpy soil, but it couldn't hurt.)

Step Three: Put down the sand layer. The sand acts as a water-permeable layer that holds up the topsoil. Experts recommend layering a few inches (about 7 centimeters) of coarse sand between the drainage layer and the soil layer [source: Hessayon].

Step Four: Put down the soil layer. This all-important layer can make or break your rock garden plants. Mix together a soil that will allow your flowering plants to bloom to their full potential. Although some plants might call for slightly different variations on this mixture, experts recommend the following combination that supports most rock garden plants:

Lean on the liberal side when you're making your mixture, as you may need the extra soil for a step on the next page.

Now that you've got your foundation settled, it's time for the fun part. Steps five through eight on the next page require some heavy lifting and discerning design choices.

Let's Rock: Planting Rocks and Flowers in a Rock Garden 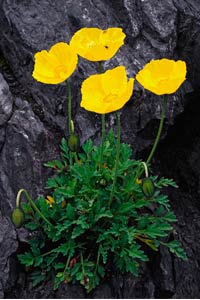 ­Arranging the design of your rock garden will take some patience. Carrying heavy rocks to your garden plot might be more than a one-person job, so ask a friend to help before breaking your back. Also, don't be discouraged if the plants you select for your garden don't thrive there. Finding the flowers and plants that grow the best in the foundation you've created takes some experimenting.

Step Five: Rock out. Ideally, you could use rocks found naturally on your land for constructing your rock garden. But there aren't always a lot of rocks available in your backyard, so you may want to check out a home improvement store that carries landscaping rocks. Choose rocks that will blend in with your lawn. Experts recommend getting one­ ­variet­­y of rock in many different sizes [source: HGTV]. Arrange them by scattering them in a natural-looking setting.

For larger, boulder-size rocks, it's important to dig them into the ground at least a third of the way. This makes them look as though Mother Nature put them there and you didn't just drop them on your garden plot [source: Ward]. Moving these boulders to the garden will take some heavy lifting. One expert suggests hoisting them on a platform over several roller poles. As you move the boulder forward, take the back roller and move it to the front [source: Hessayon].

Step Six: Let it be. Before you jump into planting flowers, let the garden settle for a while. Chances are, after a few weeks, the soil will have fallen a bit. When this happens, fill with the leftover mix of soil you made in step four.

Step Seven: Plant flowers. Like we mentioned above, picking the most successful rock garden flowers for your climate and garden might take some experimenting. Begin by planting only a scattering of a few flowers. As this first batch grows, observe how they do and how the garden looks as a whole. Later, you can always move the flowers to a new location in the garden and add more as you see fit.

Step Eight: Enjoy! Rock gardens are very low-maintenance, but you should be on the lookout for weeds. As soon as they appear, make sure to pull them out by hand. Weed killers might be too harsh on the rock garden flowers.

­If you're even more ambitious, you may want to try your hand at building a traditional Zen garden, also known as a Japan­ese garden. Although they may look simple, traditional Zen gardens are very carefully planned gardens and can be deceptively high-maintenance. Every element of this kind of garden is symbolic, i­ncluding the characteristic raked lines of sand, which symbolize water. They are primarily meant for meditation and ultimately should evoke a calming atmosphere. Their inherent appeal has led to Westernized, do-it-yourself versions that are simplified, smaller and much easier to maintain, though not as highly symbolic.

Looking for even more dirt on landscaping? Explore the links on the next page.

The most famous Japanese garden is the Ryoanji Temple garden in Kyoto. The symbolism behind this 500-year old, calming garden continues to be somewhat of a mystery. According to Zen priests, only reaching enlightenment will allow someone to completely absorb it [source: Takayama].