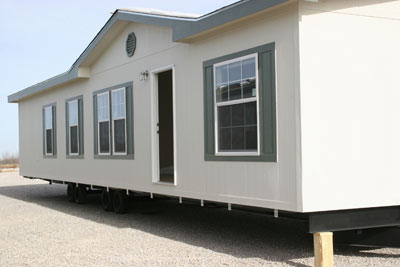 This manufactured home was built on a steel frame and will eventually sit on a permanent foundation.
© Photographer: Lecajun | Agency: Dreamstime

"Prefabricated housing" is an umbrella term that covers manufactured and modular homes.

Manufactured homes (previously known as mobile homes) are built on nonremovable steel frames, known as chasses. The chasses are used for transporting the homes and for permanent support. Manufactured homes are built according to Manufactured Home Construction and Safety Standards (HUD Code) and can be placed on permanent foundations, at which point they can be considered real estate. They typically are considered a low-cost alternative to regular construction because of their assembly-line construction.

Modular housing, on the other hand, is considered manufactured housing's higher-class sibling and is associated more with the "prefab" trend. Modular homes consist of units or modules that are constructed in factories and joined together on site; they often use costlier materials and are bigger than manufactured homes. Plus, modular housing offers many more customization options, including pricey upgrades like granite countertops and personal touches like antique tile flooring. In fact, many upscale module houses are pricier than site-built (also known as stick-built) houses after owners add the desired details and upgrades. Modular housing must conform to the home site's state, local and regional building codes -- which go above and beyond HUD Code restrictions. The houses are transported on reusable carriers and are classified as real estate once they're placed. Modular homes do not use steel frames; similar to stick-built homes, they are constructed using wooden beams with steel posts for support. The framework, as well as the fact that modules can be stacked and reorganized, allows for multiple stories and basements.

Manufacturers have started to expand operations for choosing a prefabricated house. Some buyers will go to a showroom and pick out units or rooms, but prefab manufacturers are now trying out site-selling. Buyers can go to a site or even a community and tour houses that they can buy, and a manufacturer will deliver the pieces to the home site. They can also pick and choose rooms and customizations.

Ordering a prefab home sounds like a cinch, but what other costs need to be factored in? We'll find out them on the next page.

What's Wrong with the FEMA Trailers?

There’s been plenty of bad press about FEMA in the wake of Hurricane Katrina, and the trailers that the agency set up for the displaced victims of the storm have also been widely criticized. Besides being aesthetically unpleasing (the Times-Picayune of New Orleans said they have “refrigerator styling”), the FEMA trailers are also considered unsafe should another big hurricane hit the Gulf region. There is also concern about the air quality in the trailers -- tests have shown t­hat the formaldehyde concentration in many of them is higher than the EPA considers safe. Many prefabricated homebuilders say they can construct sturdier and bigger homes faster than FEMA can find trailers. Plus, some of them claim they can beat the prices FEMA is paying for the trailers.