by Sarah Alban
Prev NEXT
4

Pay Your Dues on Time 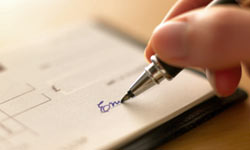 The best way to avoid problems with your HOA is to pay your dues on time.
BananaStock/Thinkstock

It seems like a big price to pay, but if you fall behind on your association dues, the HOA can foreclose your home [source: Rebuild.org]. After foreclosing on your home, your association can auction it off and evict you [source: Rich]. One Houston lawyer says if this happens to you, your best option is to appeal to the HOA's humanity.

But that didn't seem to work for one Texas couple, where foreclosures have been increasing over the last couple of decades [source: HOAdata]. In 2009, an Army National Guard captain serving in Iraq had his Texas home foreclosed on by his homeowners association. His wife missed $800 worth of dues because she fell into a depression, so the HOA auctioned off their home, which was completely paid off and worth about $300,000, for just $3,500, enough to cover their past dues and the HOA's legal fees [source: Goodwyn].

It's cases like this that have some groups accusing homeowners associations of trying to create oligarchies out of their power, in that they are a small group of people controlling masses with intentions of serving their own benefit rather than those of the people they represent [source: Bergemann]. The best way to avoid this type of situation is to pay what you owe and pay on time.