Is there any way to get out of a restrictive covenant? 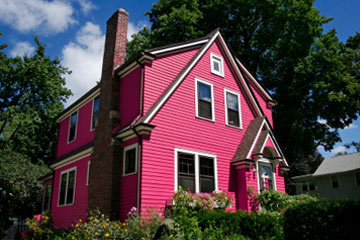 That new pool in the backyard is going to be perfect. You paid the contractor the deposit last week, and they're scheduled to come break ground on Monday. You've even got a brand new bathing suit waiting in the dresser for the first hot day of summer. Then, you get a note in your mailbox from your neighborhood association. It turns out your property is subject to a restrictive covenant banning any pools on the premises. How can this be? You don't remember signing any covenant. Is this legal?

In short, yes. In the simplest terms, a restrictive covenant is an agreement between a property owner and other parties that limits the use of a property [source: American Bar Association]. The covenant is typically written into the deed, or referenced in the deed and kept on file with a county or municipal government, or with a private entity like a homeowner's association. In legal terms, restrictive covenants "run with the land." In other words, they apply to the property itself, and not the specific owner who makes the agreement. So, their limitations are legally binding for anybody who subsequently buys the property [source: American Bar Association].

Restrictive covenants date back to 18th- and 19th-century England. During the Industrial Revolution, private landowners used covenants to come to agreements about the use of land. A particular property's deed might contain a covenant preventing a factory from operating, for example, to protect surrounding farmers [source: McKenzie]. In the United States, deed restrictions initially served a purpose similar to those made in England. Before zoning laws became common, restrictive covenants were used to prevent livestock or machinery from encroaching on residential areas [source: Dehring].

By the 1920s, restrictive covenants began to serve the purpose they do today: enforcing standards of neatness and uniformity in more affluent neighborhoods [source: McKenzie]. These days, restrictive covenants are most commonly put into place by subdivisions, builders, developers or homeowner's associations (HOAs). Covenants are used to keep property values from falling by enforcing certain standards. Those standards can apply to landscaping, architecture, outbuildings, fences, paint color, building materials, driveways, and even things that might seem out of the bounds of a property deed, like how many vehicles a homeowner can keep parked in front of their house, and what type of pets they can own. Restrictive covenants can be very difficult to avoid, as residents of particularly finicky neighborhoods will often attest. But there are ways to circumvent the covenants or remove them from deeds outright. Read on to find out how.

Is It Still Enforceable?

The easiest way to elude the requirements of a restrictive covenant is to simply ignore it. Covenants can become unenforceable if they expire, if there is a history of the covenant being violated, or if there is no individual or group benefiting from them. But it's very important to make sure the covenant is void before violating it. Otherwise, you could face legal action.

One example of an unenforceable covenant is one that restricts a property to ownership by a certain race. Such covenants were widespread in the early 20th century, preventing African-Americans, Asian-Americans, Irish immigrants and other minorities from moving into primarily white neighborhoods [source: McKenzie]. Discriminatory deed restrictions were ruled unconstitutional by the U.S. Supreme Court in 1948, in the case of Shelley v. Kraemer. However, because deed restrictions are so difficult to revise, these unenforceable discriminatory covenants are still intact in deeds across the country. For example, in 2009 the NAACP sued a Charlotte, N.C. subdivision because of racially discriminatory language contained in its list of deed restrictions [source: Shayne]. The subdivision later paid a $17,500 settlement to the NAACP [source: Rose].

In some cases, covenants are given a set expiration date. Any information about expiration is listed in the deed, or on file with the municipal government. If the covenant is expired, or will expire in the near future, a property owner can safely violate it without fear of legal ramifications [source: Rossi, et al].

Other times, covenants may be unenforceable because the original wording of the covenant is inexact. Judges will usually throw out a covenant if it does not lay out its terms in detail. Examples of overly vague covenants could include unexplained references to "standards of maintenance," or requirements that the home be similar to other homes in the neighborhood, without explaining how [source: Fambrough].

If a deed restriction is not enforceable, you can choose to ignore it and take on the risk of a neighbor filing suit, or you can seek out a judge's ruling to have the covenant removed from the deed. Obtaining that ruling is easier when no one is actively enforcing the covenant. In neighborhoods where a homeowner's association actively polices violations, fighting restrictions is much more difficult. To find out how to remove restrictions from a deed, read on to the next page.

Restrictive covenants can be written into deeds relatively easily when a property is sold. So, they're subject to the whims of eccentric property owners. For example, a man in South Carolina who sold off plots of his rural land in 1998 drew up restrictions forbidding anyone born north of the Mason-Dixon Line from buying them [source: Sullivan]. In England, restrictions can remain unobserved in deeds for hundreds of years, resulting in strange stipulations like a ban against making salted pork on a property [source: Snell].

When a homeowner's association (HOA) is monitoring deed restrictions in a neighborhood, you will need to take a more proactive approach to fighting a restrictive covenant. The purpose of an HOA is to ensure that property values for all residents stay at a desirable level, which means enforcing restrictions.

The first step is to read the deed and its restrictions carefully. In HOA neighborhoods, the restrictions are usually in a secondary document, not the deed itself. This document, usually called a list of covenants, conditions and restrictions (CC&Rs), contains procedures for altering restrictive covenants. Usually that means applying to the HOA for permission.

Homeowner's associations have a reputation for being strict and uncompromising, but how willing the HOA is to allow changes will vary by neighborhood. Some are more lenient, some are unbelievably strict. In most HOAs, you can apply for permission to stray from a restriction slightly, for example, by asking to build a privacy fence when only chest level fences are allowed. This is called a variance. You can also apply for a waiver, which is typically more difficult. A waiver is asking for permission to completely ignore a restriction [source: Rossi, et al]. For example, adding a back deck when decks aren't allowed. In most HOAs, there is a committee in charge of granting or denying such requests. Again, neighborhoods and HOAs vary, but in general, the more modest the request, the more likely it will be allowed.

If the HOA won't grant a waiver or a variance, you can attempt to have the restriction changed, or removed from every deed in the neighborhood. This usually requires a majority vote of the members of an association. That can be difficult to obtain, since typically only a dedicated few attend HOA meetings [source: National Association of REALTORS]. So, it might take a diligent campaign of door-knocking and persuading to get the required votes.

If none of those solutions succeed, you can seek legal action against the HOA. A judge can rule to void the restriction from your deed, or from the common CC&Rs of the association. This is usually very difficult. In most cases, you will have to prove that the HOA does not have the right to enforce the restriction, or that they have not exercised the right. This involves demonstrating that there is a pattern of other residents breaking the covenant without reprisal. In an extremely strict HOA, this can be especially challenging [source: Fambrough].

The best solution is to buy carefully, and make sure you fully understand any restrictive covenants that apply to a property before you make the purchase.

The Birth of the Homeowner's Association

The modern HOA, with its mandatory, neighborhood-wide, strictly enforced standards, might seem like a product of recent history. But the first such association, located in a Missouri suburb, was the brainchild of builder Jesse Clyde Nichols, who established it in 1914. Nichols might as well be the patron saint of the modern suburb: He also invented the shopping center [source: McKenzie].

Do you need to contact your homeowners association when selling your house?
How do you choose a vacant lot?
10 Deed Restrictions That Could Ruin Your Dream Home

How Mortgages Work
10 Tips for Packing
What are option fees and rent premiums?