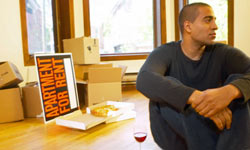 There are creative ways you can save money on rent. See more real estate pictures.
AbleStock.com/Thinkstock

You might think one of the upsides to one of the worst housing crises in U.S. history would be that housing costs would decrease for most people. But, that's not necessarily the case. In 2010, four years after the housing crisis began, the price of the average home in the United States continued to fall, actually reaching new lows in major cities like Atlanta, Chicago and New York [source: Rushe]. Still, the number of U.S. households who paid more than they could afford for housing increased from 2008 to 2009 by 1.8 percent, possibly because of increases in unemployment and other financial hardships [source: Wardrip]. But with such a bleak economic picture, finding affordable housing can still seem daunting. However there is good news: There are still some creative ways you can save money on the cost of putting a roof over your head. Read on to find some solutions for finding cheaper housing.