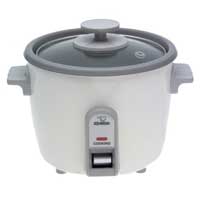 Fuzzy-logic rice cookers have computer chips that direct their ability to make proper adjustments to cooking time and temperature. Unlike basic rice cookers, which complete tasks in a single-minded, mechanical manner, the process behind the fuzzy-logic rice cookers needs a bit more explanation. The fuzzy sets theory, first proposed by UC Berkeley professor Lotfi Zadeh in 1965, laid the groundwork for fuzzy logic, which he also put forward in 1973. Fuzzy sets theory has to do with mathematical sets, or groups of items known as elements. In most mathematical sets, an element either belongs to the set or it doesn't. For example, a sparrow would belong to a set of birds, but a bat wouldn't. In fuzzy logic, though, elements can belong to sets in varying degrees. So since a bat has wings, it might belong to a set of birds -- but only to a certain extent. Fuzzy logic is basically a way to program machines so they look at the world in a more human way, with degrees of truth. Instead of cold, hard parameters and strict data sets, fuzzy logic assumes a more practical approach. Using numbers, it incorporates non-definitive words like "slightly" or "almost" into its decision-making processes. As a result, the use of fuzzy logic in rice cookers helps to ensure properly cooked rice because it gives the appliances the ability to make judgment calls similar to those a person might make, albeit typically better than those a hungry, impatient person might make.

An example of when fuzzy logic might be called into action is when the rice is cooking too fast on a hot day. In a typical scenario, the fuzzy logic algorithm will take the form of an if/then statement such as, "If the rice is too hot, and it is continuing to heat up fairly quickly, then the heating element needs to be turned down."

While fuzzy-logic rice cookers function under the same premise as basic models, their mathematical programming can deliver a slew of customized cooking options. The trick to these capabilities is the rice cookers' ability to react, making precise fluctuations in cooking time and temperature depending on the program selected. These may include different keep-warm and quick-cook cycles for the optimum cooking of rice varieties like sushi rice, porridge rice, mixed rice, white rice, sweet rice and brown rice. Some models also offer texture settings, allowing people to select hard or soft and sticky or wet rice.­ ­

But even with all these features, fuzzy-logic rice cookers are not the most advanced rice cookers available. That prize goes to the models that also use induction heating.­

It's a Fuzzy World

In addition to rice cookers, devices like automatic washing machines, refrigerators, computers and even subway cars use fuzzy logic to function.