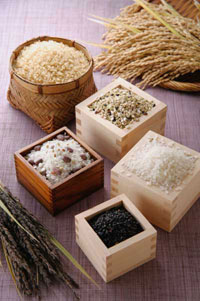 There are several things to keep in mind to make sure everything goes as planned when you're using a rice cooker. But before we go into that, let's look at the different varieties of rice you might be cooking, specifically the differences between brown and white rice.

While several common types of rice are simply different varieties of plant species in the Oryza genus, white rice typically differs from brown rice only in how much it has been polished. When rice is harvested, its natural husk, called its chaff, is usually polished off to create brown rice products. From there, more polishing in varying amounts can remove the bran layer, changing it from brown to white rice in stages. In addition to the bran layer, rice has a small portion called the germ attached to it, and this can be polished off as well. Once rice has been through this entire process, it is considered typical white rice.

When using most rice cookers, you should wash the rice prior to cooking. Unless you're cooking the aptly-named rinse-free variety, washing the rice is an important step to clean off any remaining particles from the production process, which in some countries can include talc. Rinsing the rice is also a good way to clean off any excess starch, which will make the rice less sticky. The one exception to this rule is large, fully-automated rice cookers that rinse the rice for you.

Another important tip is to keep the measuring cup that typically comes with a rice cooker. Measuring-cup volumes vary from country to country, and to make sure you're filling your rice cooker with the right amount of rice and water, you'll need that little cup. This is also important because most rice cookers have an optimum load capacity. For example, a rice cooker with a capacity of seven cups may work best when preparing four to six cups of rice. But try to cram in eight cups or go light and make one, and you probably won't enjoy the finished product.

It's also good to note that different varieties of rice require different amounts of water to cook properly. Many rice cookers feature measuring lines etched in the inner cooking pan, which are usually appropriate for short grain white rice and some types of brown rice. For other types of rice, follow instructions about how much water to add. The freshness of rice may also affect the amount of water and cooking times -- typically more water is needed for older rice.

­Now that you know the path to rice-cooker success, you need to choose the best one for your needs. The next section will help you select your perfect rice cooker.­­

More Than Just a Side Dish

Rice provides a lot more than nourishment. Rice and its by-products can also be found in a variety of household products, such as rope, paper, cosmetics and toothpaste [source: U.N. Food and Agriculture Association].

What's the Difference Between a Pressure Cooker and an Instant Pot?
Is the Thermomix Worth the Hype (and the Price)?
How Slow Cookers Work