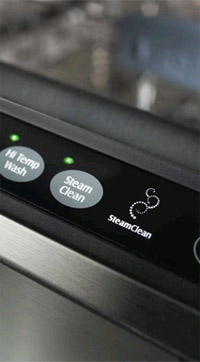 The name "steam dishwasher" might seem misleading. These dishwashers don't exclusively use steam, but steam is an important and effective step in their cycle. Knowing this, skeptics might question the marketing behind calling these new products steam dishwashers. After all, haven't we all seen traditional dishwashers release steam when we open them after a hot wash?

It's true that conventional dishwashers do produce some steam. In fact, some adventurous cooks effectively steam salmon in a dishwasher. However, this steam is mostly just a byproduct of the drying cycle (to dry dishes, dishwashers heat up the air, which converts the leftover water to steam). On the other hand, cutting-edge steam dishwashers actually harness steam's cleaning ability in the washing phase. Specifically, they can either directly heat the water in the tub into steam (as with Maytag models) or incorporate nozzles dedicated to releasing pure, hot, high-pressure steam at the right time (as with LG models).

With the latter nozzle method, steam dishwashers will include a steam generation unit. The unit allows the appliance to heat water into a steam state in a separate section from the main tub. This way, streams of pure steam can release directly from the nozzles to the main tub with the dishes.

Although steam dishwashers don't exclusively use steam as a cleaning method, the user has the option to add a steam cycle to clean a load of dishes. But steam dishwashers can use steam differently and at various times. For instance, some steam dishwashers, such as LG's models, have a special setting that uses steam to clean fragile dishes. Because steam doesn't need to use force to get dishes clean, it's a great tool for cleaning fine china and other easily breakable items. Adding a steam option to other, more rigorous cycles also will help it clean more effectively. It's like adding an extra boost of cleaning power to the traditional cycle.

The GE steam dishwasher includes another option, however. In addition to a normal steam phase, the GE Profile SmartDispense2 model has a cycle to prewash dishes, which is purely a steam bath, so that users don't have to manually rinse dishes prior to loading [source: GE]. Other steam dishwasher models from Maytag offer yet another steam option. Maytag provides what it calls "SteamClean" features. The SteamClean adds 24 minutes to the end of the cleaning cycle during which the appliance inundates the load with high temperature steam and a rinse before drying [source: Maytag].

Out, Out, Damned Spot!

Even if you don't have a fancy dishwasher, the experts at Consumer Reports say strategic loading of dishes is the key to an effective cleaning. In particular, it's important to place large items along the sides and back and face the dirtiest items toward the spray (which usually shoots up from the rotating spray arms) [source: Consumer Reports].

How Dishwashers Work
How can you wash and dry clothes with steam?
Do steam dryers eliminate the need for ironing?