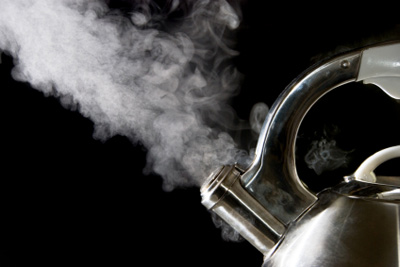 Want to blow off some steam about your old dishwasher? New dishwashers use steam itself as a cleaning agent.
©iStockPhoto/Can Balcioglu

Believe it or not, the modern world largely runs on steam. Most people associate steam power with antiquated steam boats and the Industrial Revolution of the 19th century, but the truth is, many of today's power plants still rely on it. Whether it's a fossil-fueled or nuclear power plant, its process involves heating water to its gaseous state -- steam -- to turn a turbine and create electric power. But simple steam also has more hands-on modern uses.

For instance, one of the most common ways we use steam in our daily lives is in ironing our clothes. When an iron infuses fabrics with steam, wrinkles disappear. Steam also is a fast (though all-too-temporary) cure for congestion from the common cold. By loosening mucous, the steam allows it to easily drain, which opens air passages. Aside from these home uses, steam also can effectively sanitize things with its high temperatures. Hospitals, where cleanliness is paramount, use steam in pressurized mechanisms to thoroughly sterilize their instruments.Why not use that same sterilizing power in the home? That's precisely the idea behind the advanced steam dishwasher, a follow-up to steam washers and dryers.

For many people, traditional dishwashers are a pain. If you don't rinse your dishes in the sink before you load them into the dishwasher, you may find food dried onto your dishes and flatware when you unload. This prewashing largely defeats the water-, time- and energy-saving benefits of a dishwasher. Not only that, but rigorous dishwashers may swish your precious heirloom china into bits.

In the next few pages, we'll investigate these state-of-the-art dishwashers and find out how steam fights grime.