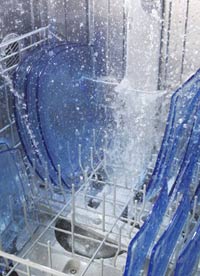 Even if the steam wash doesn't impress you, some of the appliance's other features might.
Maytag

Appliance companies are touting new top-of-the-line steam features as the latest and greatest thing in dishwasher technology. But should we believe the hype? After all, a steam dishwasher can run you up to $1,600 (whereas quality ones can be as little as $650), so it's best to know all the dirty details before making the purchase. Do these dishwashers get your dishes and flatware significantly cleaner?

Consumer Reports performed tests on steam dishwashers to answer that very question. Researchers ran the dishwasher with dirty dishes on steam cycles. Then they ran dishes in the same dishwasher without using the steam options. They found that the addition of steam does in fact make dishes cleaner -- but only a little bit. In the end, they concluded that the difference between steam cleaned and traditionally cleaned dishes was only slight [source: Consumer Reports]. In fact, they found that the spray jet features of some dishwashers worked more effectively than steam (for those dishes that got a front seat to the water blast).

But the Consumer Reports editors did grant that, besides the steam features, these cutting edge dishwashers are generally more stylish and easier to use than conventional models. Convenient, adjustable and additional racks are a major plus for these dishwashers. They also happen to be very quiet and energy-efficient appliances. So, even if steam performance, style, convenience and quiet aren't sufficient, the prospect of long-term savings in energy bills might persuade customers that they're worth the money (visit the Energy Star Web site to find out how much a particular model might save you.)

Another incidental advantage is that many new steam dishwashers advertise having a very large capacity. But if you're sick of the traditional, oversized dishwasher and you're in the market for a more space-efficient appliance, the Swash might be right for you. Although the Swash is still in development with an Australian company, Envisage NanoSytems, and is not yet ready for sale, the design is impressive. The Swash is a steam dishwasher that takes up very little space. (The designer hopes it will one day fit on a countertop like a microwave.) It even has a steam setting that requires absolutely no detergent (but rather sanitizes through the high temperature of the steam). Though it's conveniently small, it can fit about four place settings inside. Because it filters and reuses water, it's extremely water efficient. And, as it takes less heat to warm up a smaller volume of water, it's also highly energy efficient [source: DesignBoom].

Want to learn more about your other household appliances? Check into the links on the following page.

A Little Water Clears Us of This Dirt

Traditional dishwashers typically use far less water than people use while hand washing dishes. Even prerinsing is largely a waste of water and energy [source: Consumer Reports]. But environmentalists will be glad to know that companies typically advertise steam dishwashers as more water efficient than older models. Using steam saves water because a little water goes a long way to create steam that takes up more volume.