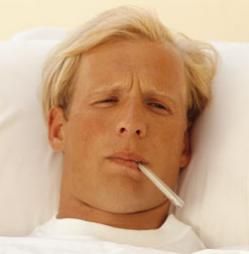 ­If you look around your house, you will find lots of different devices whose goal in life is to either detect or measure changes in temperature:

­In this article, we will look at the different thermometer technologies used today and understand how they work. You wil­l also get to build your own thermometer!­

­ The bulb thermometer is the common glass thermometer you probably grew up with. The thermometer contains some type of fluid, generally mercury.

Bulb thermometers rely on the simple principle that a liquid changes its volume relative to its temperature. Liquids take up less space when they are cold and more space when they are warm (this same principal works for gases and is the basis of the hot air balloon -- for more information, see How Hot Air Balloons Work).

You probably work with liquids every day, but may not notice that things like water, milk and cooking oil all take up more or less space as their temperatures change. In these cases, the change in volume is fairly small. All bulb thermometers use a fairly large bulb and a narrow tube to accentuate the change in volume. You can see this for yourself by making your own bulb thermometer from scratch. Here is what you'll need:

To make your thermometer:

What you have created is a simple bulb thermometer. And it works pretty well. If you wanted to you could calibrate it, and it would tell you the temperature fairly accurately. This particular thermometer has a few problems, however:

­ Sealing mercury in a small glass thermometer solves these problems. The small size of the bulb means that the bulb reaches the temperature of what it is measuring very quickly, and the tube in such a thermometer is micro-fine. Mercury also avoids the freezing and boiling problems associated with water.

How do you calibrate the thermometer? Two common scales are used:

As you can see, the temperature scales we commonly use are completely arbitrary! You could come up with your own scale if you wanted to. The freezing and boiling points of water are nice because they are easily reproduced, but there is nothing to say that you couldn't use another scale.

Bulb thermometers are good for measuring temperature accurately, but they are harder to use when the goal is to control the temperature. The bimetallic strip thermometer, because it is made of metal, is good at controlling things.

The principle behind a bimetallic strip thermometer relies on the fact that different metals expand at different rates as they warm up. By bonding two different metals together, you can make a simple electric controller that can withstand fairly high temperatures. This sort of controller is often found in ovens. Here is the general layout:

Two metals make up the bimetallic strip (hence the name). In this diagram, the green metal would be chosen to expand faster than the blue metal if the device were being used in an oven. In a refrigerator, you would use the opposite setup, so that as the temperature rises the blue metal expands faster than the green metal. This causes the strip to bend upward, making contact so that current can flow. By adjusting the size of the gap between the strip and the contact, you control the temperature.

You will often find long bimetallic strips coiled into spirals. This is the typical layout of a backyard dial thermometer. By coiling a very long strip it becomes much more sensitive to small temperature changes. In a furnace thermostat, the same technique is used and a mercury switch is attached to the coil. The switch turns the furnace on and off. 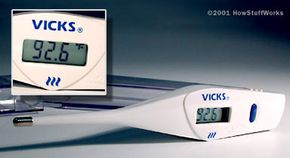 It is now common to measure temperature with electronics. The most common sensor is a thermoresistor (or thermistor).

This device changes its resistance with changes in temperature. A computer or other circuit measures the resistance and converts it to a temperature, either to display it or to make decisions about turning something on or off. If you would like to build your own electronic thermometer, check out How Microcontrollers Work.

For more information on thermometers and related topics, check out the links on the next page! 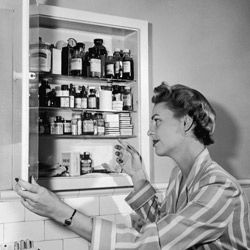 Up Next
10 Items in Medicine Chest
Explore More 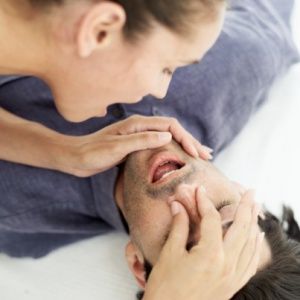