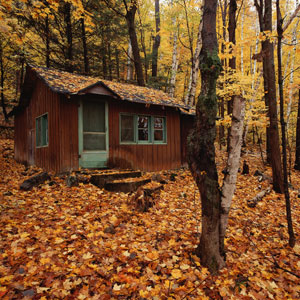 ­Imagine living in a 10 foot by 7 foot (approximately 3 meter by 2 meter) home for more than five years, by choice. That's just what Gregory Paul Johnson of Iowa City, Iowa, has done. The national 2007 average was 2,521 square feet (234.21 square meters), more than 2,400 square feet (222.97 square meters) more than Johnson's home [s­ource: U.S. Census Bureau]. While the thought of willingly and happily giving up extra square footage might ­be inconceivable to many Americans, there's a new movement of people like Johnson that are choosing small spaces over larger dwellings.

The small house movement is a grassroots effort of people living more simply and using less space. While tiny houses of under 100 square feet (9.29 square meters) are certainly a part of the movement, the principles don't only revolve around house size. "It's more just about the attitude of living life simply and as small as is comfortable for each person," says Johnson. "That is certainly not a cookie-cutter approach; each person can have different needs."

Fitting into the small house movement is very much an interpretation of each person's definition of living more efficiently. "I never really make a definitive definition of what is small and what constitutes a small house," says Jay Shafer, founder/designer of the Tumbleweed Tiny House Company and resident of an 89-square-foot (8.27-square-meter) home. "A 4,000-square-foot (371.61 square meters) house could be a small house, if the space is being used well."

­Starting with just a few individuals, the movement has seen an increased popularity within the last­ five to seven years. Johnson has noticed this interest through an increase in the traffic on the Web site for the Small House Society, an organization started in 2002 to support the movement [source: Resources for Life]. From around 50 visitors five years ago, the Web site now easily gets 1,200 to 1,500 visitors a day [source:Johnson].

People have been drawn to the movement for a number of reasons, including economic and environmental. "Thanks to the confluence of an economic downtown, a housing crisis and global warming, more attention is now being paid to how much space we really need," says Shafer.

In this article, we'll explore the characteristics of a small house, the costs involved and the people that are choosing to live more simply.

A common layout for a small house incorporates an open living space on the first floor, including a kitchen and bath, along with an upstairs sleeping area. Some small houses have multiple bedrooms and bathrooms, and some offer only a sleeping loft and a toilet/shower closet. Still others don't even come with bath and kitchen facilities as a standard component of the plan; they're offered only as upgrades.

These purposeful design layouts are paired with space-saving interior features. Many plans incorporate built-in cabinetry and shelving for more storage space. Appliances tend to resemble those in an RV in smaller homes, while larger homes can have full-size appliances. Many of the homes' manufacturers have even teamed with specific retailers to offer packages thoughtfully chosen for small house environments.

Another feature offered with some of the small units is a set of wheels. Rolling or portable tiny homes tend to fall on the smaller side of the square-footage range along with offering a few less amenities than the permanent versions. Much like a snail taking its home wherever it goes, a homeowner of a portable tiny home has the freedom to hitch his or her house to the back of the car and drive away.

Before a small house can be enjoyed, on or off the road, it must be built. The options for construction extend from prefabrication to build-your-own models. Many tiny houses are available as modular units that are made in sections at a factory and assembled at the home site. While putting together the home on-site can take only days, it's important to note that these options can come with installation and delivery fees.

For the build-your-own option, plans can range from $350 to more than $995 depending on the manufacturer and the unit [sources: Cabin Fever and Tumbleweed Tiny House Company]. Going with the build-your-own option allows the homeowner greater freedom in the choice of materials and can also bring an economic savings. For example, the XS-House model by Tumbleweed is estimated to cost about $16,000 as a build-it-yourself unit, while ready made units run about $36,997 [source: Tumbleweed Tiny House Company].

One of t­he many reasons that people turn to tiny houses is the economic benefits. While some sell for the price of an average car, others can cost more than $600,000 [sources: Johnson] and The Cottage Company]. Location, size and material choice used are major factors in determining the price of tiny houses. Yet, the initial cost of a home is only the start. Taxes can be affected by downsizing to a smaller home. Property taxes are based on the assessed value of the home, so the more expensive your tiny house, the more taxes you'll have to pay [source: U.S. Department of Housing & Urban Development].

Maintenance or upkeep for a home can also have a large bearing on the overall burden of living expenses for a homeowner. Johnson believes that his home's commercial grade materials helped to give him a low maintenance small house.

Along with low maintenance for the actual structure, most tiny houses cut down on the time and energy needed for household chores. Many have smaller yards or no yard at all. This means less time spent cutting the grass or weeding flower beds. Inside the house, for example, scrubbing two or three toilets can take double or triple the time it would take to clean one toilet.

A small house can result in saving both money and time, which the homeowner can then put toward other pursuits. Whether for economic or lifestyle reasons, there are people across the country choosing to live out this movement. Let's take a closer look at the types of people and homes that are making up the small house movement.

While small houses are already eco-friendly simply by the lack of materials needed to produce them and the energy needed to heat and cool them, some manufacturers and builders go a step further. For example, kitHaus utilizes structurally insulated panels (SIPs) with high insulation values and offers a solar package for the roof [source: kitHaus]. ­

Tiny houses can be found everywhere from a sma­ll town in Utah to a residential neighborhood in Washington. They can offer a more affordable option for first-time homebuyers, it's also a viable option for those trying to downsize such as empty nesters or newly retired couples

While most buyers are single or couples, there are families choosing to live in limited square footage. For example, Scott and Lolit Smith, along with their three children, live in a 10 foot by 12 foot (approximately 3 meter by 4 meter) home that includes a loft. Living in the home full time during the summer, they've had to make adjustments like cooking on a hot plate and putting sleeping items away during the day. But they say the key is utilizing the outdoors.

"The space is more than adequate if you have a loft with a 10 foot by 12 foot (approximately 3 meter by 4 meter) (home) and if you have weather that you can go outside," says Scott Smith. "The weather is a big factor in it."

Other buyers choose the residential lifestyle of a neighborhood with shared open spaces to fit their needs. Cottage-style or clustered communities are popping up across the United States with several in the Pacific Northwest. Many of these developments have a community of tiny houses with individual lots that open to a communal central lawn [source: The Housing Partnership]. Some are also equipped with shared community centers or buildings. It's important to note that many cities have special Cottage Housing Development ordinances regulating the look and the number of cottages related to the land used for these communities [source: Lehigh Valley Planning Commission].

From 70-square-foot (6.50-square-meter) homes on wheels to living simply in 1,500 square feet (139.35 square meters), some see this move to smaller houses and simpler lives as a trend of the future. While only time will tell, the small house movement has certainly offered a new perspective on housing options in the United States.

Small cottage-style homes are part of the federally funded Alternative Housing Pilot Programs launched in the Gulf Coast region [source: FEMA]. These homes are being trialed as an alternative to Federal Emergency Management Agency (FEMA) trailers because they can be quickly and affordably built along with offering a more permanent housing option. In Mississippi, more than 2,800 families are now living in Cottage units, which reflect the Gulf Coast's architectural design style and range from 728 to 840 square feet (67.63 to 78.04 square meters) [source: Mississippi Alternative Housing]­

10 Big Questions About Tiny Houses
10 Homes of the Future ... Today
What's the least expensive way to green your roof?