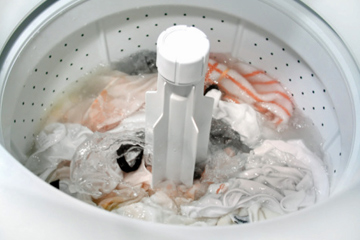 The amount of water used in one load of laundry may shock you.
Hemera/Thinkstock

Washing clothes has been a big chore since man first discovered the value of whacking garments on rocks in nearby streambeds to get them clean. There was plenty of water back then, but the labor was backbreaking. Modern washing machines save on labor and time over the old rock or washboard methods, but energy and water usage issues are putting them in the line of fire from environmentalists and cautious consumers.

It's hard to look at water usage for washing machines without looking at the issue of energy usage, too. Washers soak clothes, tumble or agitate them and then extract as much water as possible to promote fast, efficient drying. From a water usage standpoint, it's a matter of employing as little of the wet stuff as possible at the beginning of the process -- to wash the clothes -- and then getting rid of as much water as possible from the newly cleaned clothes to make drying them an energy-efficient process.

The washing machine style you're probably most familiar with is the top-loader. A conventional top-load washing machine uses agitation to clean clothes. It's been the standard for decades. The concept of agitation has a long history that goes back to manual paddle mechanisms that worked a little like handheld egg beaters to churn the dirt off of clothing. For agitators to work well, though, they need lots of water to toss, whip and stir clothes around. That water can get expensive, and the energy necessary to heat it can get expensive, too. Around 90 percent of the energy necessary to clean a load of laundry in a top-load washer is used to heat the water.

Newer clothes cleaning strategies lose the agitator altogether. This allows more room for dirty clothes in a load while still lowering the water requirement. Other refinements in the process also mean less water left in the finished batch of laundry, which translates to less water for the drying process to remove. That's good news all around. What's the magic machine that saves water and energy while allowing you to wash more clothes per load? That would be the front-loading washing machine.

No washing machine style is perfect, but front-loaders have a lot going for them, especially from a water management standpoint. On the next page, let's look at a few water facts as they relate to top-load and front-load washing machines. No spin here, just the facts.

Conventional top-loading washing machines with center post agitators use about 40 gallons of water per load. Compare that to front-loading machines that use somewhere in the neighborhood of 20 gallons. Remember, that 40 gallons will require twice the energy to heat, too, which is one of the key costs of operating a washing machine.

Front-loaders can clean clothes with less water because they use gravity to create agitation by rotating the drum to cycle the clothes above the waterline and drop them back into the water -- again and again. With the aid of gravity, front-loaders can get clothes clean while using half the water.

We've talked about the powerful benefits front-load washers have going for them, but they're not perfect. Here are some of the cons:

Let's do some quick calculating here. In a year, the average American family washes about 400 loads of laundry. At 40 gallons of water per load, that's 16,000 gallons for a top-load washer. Because top-loaders can leave as much as two gallons of water inside a newly washed load, those extra drops are costing in a number of ways. If you have a top-loader, you're paying for the water coming out of the tap. You're also paying to heat the water, get rid of it down the drain and vent the remainder via your dryer.

If you're interested in learning more about water and energy savings in the laundry, check out a few Energy Star-rated washers for price and functionality. Energy Star is a rating system developed by the U.S. Department of Energy (DOE) and the U.S. Environmental Protection Agency (EPA) working jointly to help consumers make better informed decisions about the products they buy.