Chlorine Bleach as a Disinfectant 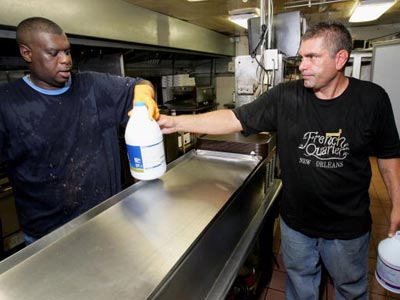 Bleach can disinfect countertop surfaces and protect from a variety of bacteria.
Ethan Miller/Getty Images

The use of chlorine bleach as a medical disinfectant was first recorded in Austria in 1847. Staff at the Vienna General Hospital began using it to keep "childbed fever," a severe infection that killed countless women after they gave birth, from spreading throughout the maternity ward [source: American Chemistry Council]. It's now used to disinfect dialysis equipment, some surgical equipment, surfaces in hospitals and medical labs, and even some medical waste [source: Ronco & Mishkin].

Chlorine bleach kills Vibrio cholerae, the bacterium that causes cholera, a disease that killed in epidemic proportions before water treatment. It can still kill in countries where clean drinking water is not available. Chlorine bleach can also kill dangerous bacteria and viruses on surfaces, such as methicillin-resistant Staphylococcus aureus (MRSA), influenza and HIV. Chlorine bleach is especially valuable as a disinfectant, since germs are not able to develop immunity against it, as they have done against certain drugs [source: Lenntech].

To kill germs, sodium hypochlorite uses the same quality that makes it such a great stain remover -- its power as an oxidizing agent. When sodium hypochlorite comes in contact with viruses, bacteria, mold or fungi, it oxidizes molecules in the cells of the germs and kills them. Scientists also believe that the hypochlorous acid that forms when sodium hypochlorite is added to water can break down the cell walls of some germs [source: Lenntech]. The hypochlorous acid also seems to be able to cause certain proteins to build up in bacteria, making their cells unable to function [source: Winter]. Non-chlorine bleaches that are oxidizing agents can also act as disinfectants on some surfaces, but they are less potent than chlorine bleach. Chlorine bleach, when used properly, is a practical and effective disinfectant.