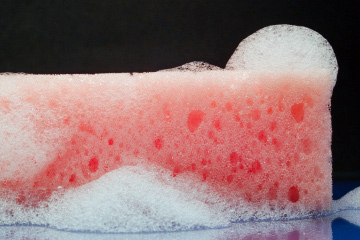 Your kitchen sponge may not be as clean as you think it is.
©iStockphoto.com/Ivanmateev

When you think of your kitchen, you probably dwell on details such as the granite countertops, stainless-steel Viking appliances and a porcelain farmhouse sink. It's doubtful that you let your mind wander off into the dark recesses, where bacteria breeds like bunny rabbits. And we're not just talking under your stove and behind your fridge. That kitchen sponge that you use to clean your drinking glasses and wipe your countertops is a hotbed of bacterial growth.

Bathrooms may seem like one of the dirtier rooms, bacteria-wise, in your household. After all, it's where the most personal business is conducted, and even though it's all flushed away, it just seems like a toilet bowl would have a high bacteria count. And although dust and grime count, it's really the bacteria level that would make something truly dirty, or in its absence, clean.

Several studies have been performed over the years, some of them by cleaning product manufacturers, that have confirmed that the bacteria levels in your bathroom aren't as high as many areas of your home. The clever headlines typically say something about washing dishes in your toilet instead of your kitchen sink. While this isn't something anyone would ever consider, tests show that the toilet is actually cleaner than the kitchen.

Wiping Away the Kitchen Bacteria

A 2008 study sponsored, but not conducted, by Lysol found that 75 percent of kitchen sponges in the United States contained harmful bacteria. Internationally, 90 percent of kitchen sponges and 46 percent of kitchen sinks had high levels of bacteria, meaning more than a count of 100,000 per square centimeter. What exactly do they mean by "harmful bacteria," you ask? We're talking e-coli and salmonella. While they won't likely kill you, you could end up with a nasty bout of diarrhea or other stomach aliments. The same study, which used samples from 20 homes from seven regions around the globe, found that the kitchen sink contained more germs than a flushed toilet bowl.

Children, animals and food are all heavy sources of bacteria, and kitchens see a lot of each in most homes. Dogs running around, food crumbs left on the counter, children touching every surface with their unwashed hands -- it's a virtual playground for bacteria. You wipe up food with your sponge and give it a good rinse, but some of that gravy you spilled will end up staying put and breeding bacteria. Another reason why a toilet is cleaner is because people generally clean them more aggressively than they do a kitchen sink. Toilet bowls are scrubbed with wire brushes using heavy-duty cleaners. Many kitchen sinks are simply rinsed and wiped on a regular basis. This may keep the surface clean, but it does nothing for the bacteria count.

Experts recommend that you wet your kitchen sponge down and pop it into the microwave for two minutes on a regular basis. This will wipe out 99.9 percent of the bacteria currently making a home in your sponge. This method beat out soaking the sponge in either a bleach or all-natural lemon juice solution in a study performed in 2007. And don't feel bad about your cleaning habits; bacteria is always in places you use the most. A 2008 UK study found that your computer keyboard also had more bacteria than the toilet.

5 Dirtiest Spots in Your House and How to Clean Them
How to Prevent Odors in Toilets
Can you disinfect kitchen sponges?

How to Organize Your Household Papers
How to Make a Fire Safety Plan for Your Home
Do clothes always shrink if you wash in warm water?