by Heather Kolich
Prev NEXT
10 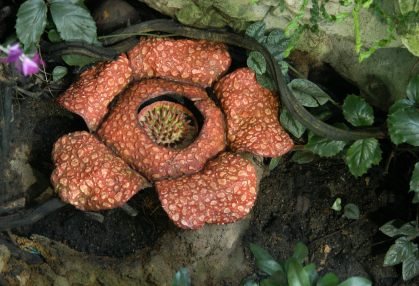 You've got to love the smell of rotting meat.
©iStockphoto/wrangel

The largest flower in the world, Rafflesia arnoldii, is actually a parasite. It relies completely on its host, the Tetrastigma vine, to provide it with roots, leaves, stem and chlorophyll. The corpse lily, as it's commonly known, expends all of its energy working through the vine to produce a 3-foot (1-meter) diameter bloom and thousands of seeds.

In the early 1800s, the British governor of Sumatra (then known as Bencoolen) was very interested in the diversity of life on the island. Sir Thomas Stamford Raffles made many expeditions into the jungle and discovered, collected and documented numerous previously unknown plants and animals. His friend, Dr. Joseph Arnold, accompanied him on one exploration in 1818, and together they discovered an enormous red flower with white spots and a disgusting odor.

The colonial explorers were lucky to happen upon the flower when they did. The bloom only lasts for three or four days. After that, it collapses into what rainforest photographer Thomas Marent describes as a "slimy black mass" [source: Marent]. Despite the fact that Raffles went on to establish Singapore and the Zoological Society of London, he is best remembered for his discovery of the corpse lily.

Native to the Indonesian islands Sumatra and Java as well as eastern Malaysia, the hefty flower starts out as a cabbage-like bud on the root of the host vine and takes about nine months to mature and open. A single flower can weigh up to up to 25 pounds (11 kilograms) and hold several gallons (liters) of nectar in a central cavern surrounded by five petals [source: Souza, Earlham]. It relies on carrion-eating flies and beetles for pollination, so the aroma it gives off is similar to that of dead, rotting animals.

The bizarre corpse lily is considered threatened or endangered in all of its habitats, but it seems to be its own worst enemy. The flowers are single sex and must be cross-pollinated to produce seeds, but female flowers are rare and don't often bloom in the same area or at the same time as the male flowers. If pollination is successful, the flower leaves behind a 6-inch (15 centimeter) round fruit that appeals to squirrels and tree shrews. They eat the fruit and scatter the thousands of hard, tiny seeds contained within it.

If you get a chance to see the flower on the next page, you'll want to skip the part about stopping to smell the roses.

Plants and flowers have two types of names: a common name and a scientific name. Common names usually describe something about appearance of the plant, such as Queen Anne's Lace. You might think that scientific names are more, well, scientific. But many, such as Rafflesia arnoldii, are derived from the people who first discovered or documented them. Others describe the plant just like common names, but they use Latin or Greek words instead of the common language of the region. The flower on the next page, Amorphophallus titanum, is an example of this, but you can puzzle out the common language meaning on your own.