What's the difference between bonsai and topiary? 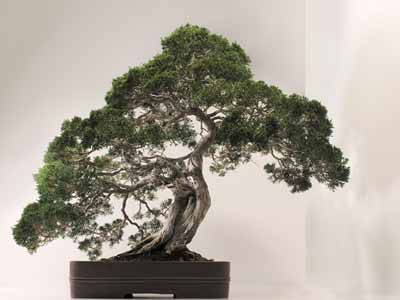 This bonsai tree has been carefully cultivated to resemble its counterparts in the wild, only on a smaller scale. See more pictures of trees.
Stephen Shauer/Stone/Getty Images

Hum­ans have been manipulating plants since the dawn of agriculture, but in many instances, these activities were done for the sake of art and beauty as opposed to food cultivation. Two notable examples are bonsai and topiary. While these may seem like similar types of plant management, their historic and cultural roots -- and sculpted appearances -- are actually the result of distinct forms of horticultural styling and artistic expression.

Although it's known that bonsai originated in China, authorities on the subject differ as to when the development of this miniaturized arboreal art form and related decorative arts occurred. Many place the advent of bonsai about 1,700 to 2,100 years ago, while some believe it started nearly 4,000 years ago [source: Elias]. While similar forms of tray landscapes retained popularity in China, the art of bonsai blossomed in Japan and achieved the status of national pastime.

Ornamental topiary, on the other hand, has its roots in the development of box hedges, which were first clipped and trimmed by the ancient Egyptians. The Romans later took up the mantle and popularized hedges made of box -- slow-growing plants of the genus Buxus, more commonly called boxwood in the United States -- as well as flourishing topiaries [source: Crebbin-Bailey].

It should also be noted that while bonsai and topiary are perhaps the most well-known of the ornamental gardening styles in the modern Western world, the field actually includes a broad range of forms. Penjing is one example. One of the early artistic practices from which bonsai sprouted, penjing is the art of miniature landscaping in shallow bowls and doesn't need to include trees. Other garden elements closely related to topiary include parterre (ornamental partitioning in gardens), cloud hedging (rippled, billowing hedges) and labyrinths.

On the next page, we'll take a closer look at the difference between bonsai and topiary and what links these two together.

The Lush Lowdown of Bonsai and Topiary 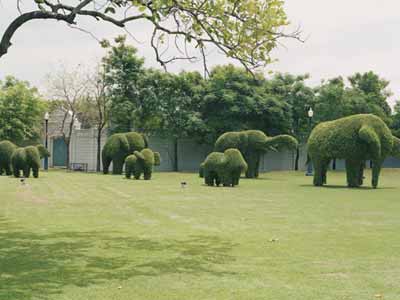 Lifelike topiary elephants look almost as if they're actually trooping across this lawn in Thailand.
Gala Narezo/Stone/Getty Images

Topiary is the cutting, shaping and trimming of trees and shrubs -- usually evergreens with thick leaves -- into a variety of artificial and ornamental shapes. Some forms are architectural, like cones and spires; others are representational, in the likeness of animals, people and other fanciful shapes. Those who create topiaries often refer to themselves as tree masons, topiary specialists and leafage sculptors. Topiaries are commonly made from robust plants such as box (as mentioned earlier) along with yew, cypress, bay and holly.

­Bonsai is concerned with miniaturizing ordinary trees and shrubs by gently snipping and pruning the branches and root systems, along with wiring the trunks and branches in order to train the growth and shape of the plants. The goal is to make the bonsai -- any of a wide range of different flora -- look like a fully mature, dwarfed tree, often with an aged and weathered appearance. The container (commonly earthenware) that a bonsai is placed in is a fundamental component -- it must harmonize with and enhance the plant. The placement of a bonsai within its container is another important consideration so the branches can spread out properly [source: Encyclopedia Britannica].

Now that we know the basics about each of these types of floriculture (the cultivation of flowers and ornamental plants), let's examine the key differences. Some of the differences between bonsai and topiary are how they're handled and the goal for the final product.

Typically, topiaries are shaped into distinctly unplantlike embodiments through meticulous shearing and sculpting; bonsai are proportionally miniaturized through systematic pruning and training of both the branches and the roots. While the goal of both is to alter a plant's growth in order to create distinct shapes, different tools and methods are often called into play. Bonsai are meant to resemble smaller versions of trees and shrubs, complete with delicate spreading branches and a main viewing side. Usually, topiaries are encouraged to grow and flourish so they resemble solid statuary components in gardens -- one reason why they tend to be prevalent in places where stone is expensive.

Another fundamental difference is size. Although some versions of topiary can be diminutive, especially when plants are first starting out, most tend to become large garden fixtures over time. Bonsai on the other hand, are prized for their smallness. Some bonsai creations are cultured to grow large, up to 2 feet (about 60 centimeters) or more, but the majority are kept under that size. Some miniature bonsai are barely 2 inches (5 centimeters) tall.

Another difference between the art of bonsai and topiary is that the former espouses the idea that mankind is one with the natural world, while the latter generally expresses man's control over nature. Topiaries are often used to add structure and form to gardens, and bonsai are traditionally independent display pieces, cared for and handed down through the generations.

There are some similarities between these leafy sculptures, one being the time it takes to form them. Both bonsai and topiary can take years to develop fully and, depending on the size, the process of growing and shaping them can take more than a decade. To master each art form requires skill, patience and, above all, experience. While both are considered works of art, there's also a science behind caring for bonsai and topiaries. The versatility that each form of floriculture offers is a hallmark characteristic; the limit to what can be accomplished is often more rooted to the confines of the imagination than the possibilities of the plants.

Weeds overgrown in your backyard garden? To read more about the horticultural possibilities prowling around out there, continue to the next page.