How much can a tree help with global warming? 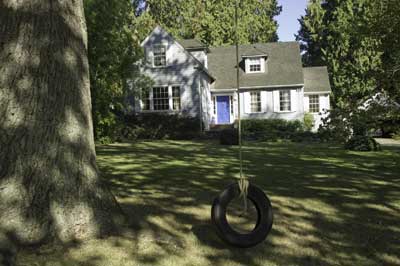 The average tree takes in about a ton of carbon dioxide in its lifespan, according to the Pew Center on Global Change. For Americans, that translates to only 5 percent of our annual carbon footprint. Although a single tree will only store a sliver of the carbon dioxide from your actions, careful planting can create a ripple effect for more energy savings.

Especially in urban areas, individual trees can make an important difference. Since paved surfaces soak in heat from sunlight far more than natural ground, tree-shaded neighborhoods may be 3 to 6 degrees Fahrenheit (1.6 to 3.3 degrees Celsius) cooler than un-shaded ones [source: U.S. Department of Energy]. A study of urban forests in the United States estimated that trees in urban areas store 22.8 million tons of carbon dioxide per year [source: Nowak and Crane].

For your home, the U.S. Environmental Protection Agency projects an overall 40 percent savings in energy expenses if you put the right trees in the right places. To maximize cost-savings, plant shade trees at the southern and western windows of your house to block sunlight and around your outdoor air conditioning unit [source: Pew Center on Global Climate Change]. Deciduous species that lose their leaves in the winter will allow sunlight to heat the house as well.

If people planted 100 million trees around their homes and businesses, American Forests has estimated that it would save $4 billion in energy costs [source: Lerner]. Simply having trees around your house can boosts its overall value up to 15 percent [source: Arbor Day Foundation].

But before you plant, do your homework. Although the perfect tree species varies with location, for carbon sequestering (carbon dioxide absorption) purposes, fast-growing hardwoods with dense wood work the best. Some of these include yellow poplar, scarlet oak and American sweetgums. Select your new trees based on what grows well where you live, soil composition in your yard and climate. Since trees go through a dormant period in the fall, this is the best season for planting [source: Lerner].

If you don't have a yard to plant a tree, you can donate to a number of nonprofit organizations that will plant one for you. Your contribution may go toward tree plantations maintained explicitly for carbon sequestering. Under the correct conditions and locations, these tree farms could cancel out 5 to 7 percent of global greenhouse gas emissions [source: ScienceDaily]. Within those parameters, forests can absorb carbon dioxide and sunlight, and stimulate water vapor production that eventually forms clouds.

One recent study concluded that there are geographical limits to a forest's positive carbon sequestering capabilities. Using a computer model to project the effects of forest-cover over 100 years, the farther away from the equator the trees were, the smaller the carbon offsetting effects became [source: Amos]. The tropical climate around the equator is prime land because trees block out sunlight and absorb water from the moist soil that evaporates and becomes low-lying clouds. In higher latitudes, colder temperatures often mean less cloud cover. Without that cover, trees absorb more sunlight, actually heating the earth [source: Swaminathan]. Also, when trees rot and die, they release their stored carbon dioxide back into the atmosphere.

On the large and small scale, tree planting should be carefully planned to promote health in the local ecosystem and the world. If you'd like to learn more about trees, visit the links below.