10 Ways to Cool Your Roof 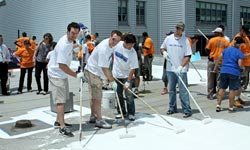 Home Construction Pictures Players from the New York Mets help coat the rooftop of the Bedford-Stuyvesant YMCA with a cool reflective paint at the "Cool The Roof" project, in Brooklyn, New York, in June 2010. See more pictures of home construction.
Steve Mack/Getty Images

On a hot, sunny day, the temperature on the surface of a traditional black roof can be more than 50 degrees Fahrenheit (10 degrees Celsius) warmer than the surrounding air temperature [source: Department of Energy ]. When you imagine that sweltering rooftop next to another, and another, and another, it's no surprise that the air in a large city with block after block of dark, heat absorbing rooftops can often be 6 to 8 Fahrenheit degrees hotter than surrounding areas [source: Heat Island Group].

Even in rural and suburban neighborhoods, the heat absorbed by a traditional roof on a sunny day raises temperatures inside the house, contributing to higher air conditioning requirements, higher energy costs, and more discomfort on hot days for anyone without air conditioning. Fortunately, the remedy for all this extra heat is relatively low-tech, low-cost, and increasingly easy to find: it's called a cool roof.

A cool roof is a roof designed to maintain a lower surface temperature in bright sunshine than a traditional roof [source: Department of Energy]. The surface of a cool roof reflects more sunlight and releases more heat than a so-called hot or dark roof. While the term "cool roof" is sometimes used to describe any roofing surface that is cooler than a standard rooftop, green certification programs such as LEED, Energy Star, the U.S. Green Building Council, and the Department of Energy Building Technology Program base their respective cool-roof credentials on a roofing material's ability to reflect the sun (solar reflectance) and release absorbed heat (emissivity). The higher the solar reflectance and emissivity (on a scale from 0 to 1), the cooler the roof.

Ready to save money, conserve energy, and cool the planet by turning your old, hot roof into a cool roof? Read on to discover 10 ways to cool your roof!

10. Roll out the modified bitumen 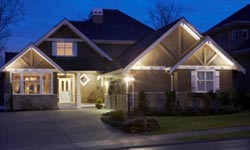 Cool roof requirements are based on the slope of the roof.
Ivan Hunter/Photodisc/Getty Images

Just about any kind of roof can be replaced with a cool roof, and some can be converted to cool roofs with the addition of special coatings or surface materials. In some states and municipalities, cool roofs are already required for all new commercial construction. Cool roof requirements are based on the roof's slope, with more stringent requirements for low-sloped roofs, which rise less than 2 feet (0.6 meters )in height for every 12 horizontal feet ( 3.7 meters), than for steep-sloped roofs, which rise more than 2 feet (0.6 meters )in height every 12 horizontal feet ( 3.7 meters) [source: Department of Energy].

To determine which roofing materials are best for your home or building, first determine the slope of your roof, then select the cool roof product that best suits your slope, budget, and architectural style.

9. Go with a single ply membrane

Another type of cool roofing material used for low-sloping roofs is a single ply membrane. Single ply membranes are pre-fabricated plastic or vinyl sheets containing solar reflective coatings or materials. The sheets are rolled onto the roof deck, then attached to the structure with some combination of chemical adhesives, mechanical fasteners, or ballast such as gravel or pavers. Single ply membranes don't require any additional coatings or surfacing -- the cool roof properties are integrated within the product itself.

Built-up roofing ( BUR) is the term for the old standard tar and gravel roof. Because it's inexpensive, easy to apply, and easy to repair, it's among the most commonly used roofing systems for flat and low-sloped roofs. Built-up roofing involves layering a base sheet of asphalt or bitumen with fabric, followed by a protective layer of gravel, mineral granules, or some sort of aggregate rock.

Traditionally, the asphalt and surface gravel in a built-up roof have been black or dark gray, trapping much more light and heat than they release, but there are several ways to make a built-up roof cool. One is to replace the surface layer with white gravel or reflective marble chips to increase its solar reflectance. Another is to apply something called a mineral surfaced cap sheet, which incorporates reflective granules or a reflective coating into the roofing material itself. Finally, special coatings or pigments can sometimes be added to an existing asphalt surface to convert a standard roof to a cool roof. This typically requires one coat of a reflective material and another of an emissive material that releases heat [source: Department of Energy].

The average cost to install a cool built up roofing system ranges from about $1.20 to $2.15 per square foot, almost the same as a traditional built-up roofing system [source: Pacific Gas and Electric], although the cost of the third option -- applying coatings to an existing surface -- is somewhat higher -- $.80 to $1.50 more per square foot [source: Department of Energy].

Cool roof coatings are sprayed, rolled, or brushed onto an existing flat or low-sloping rooftop to create a bright white, paint-like reflective surface These coatings are more commonly used in re-roofing projects than in new construction, and their cost ranges from about 75 cents to $1.50 per square foot [source: Pacific Gas and Electric]. 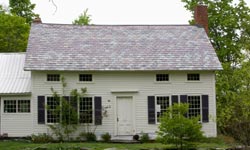 For the steep-sloped roofs found on most U.S. homes, standard fiberglass asphalt shingles can be replaced with cool asphalt shingles that help to reflect sunlight better.
Jeff Randall/Lifesize/Getty Images

For the steep-sloped roofs found on most U.S. homes, standard fiberglass asphalt shingles can be replaced with cool asphalt shingles containing specially coated reflective granules to help them better reflect sunlight. Shingles made from wood, polymer, and metal can also be coated to improve their solar reflectance [source: Department of Energy].

Shingles are generally not as reflective as any of the cool roof options available for low-sloping roofs, but their familiar appearance and traditional style make them a popular choice for residential construction. A cool shingle with white granules costs about the same as one with the old, standard dark asphalt granules, while a shingle with its specially coated granules colored to match the desired color of the roof can cost from about 35 to75 cents more per square foot [source: Department of Energy].

Unpainted metal roofs are naturally reflective (high solar reflectance), but they tend to hold heat in (low emissivity), so they are generally a better choice for steep roofs than for flat or low-sloping roofs, which receive more sunlight throughout the course of a day. A factory-applied cool roof coating can improve the heat releasing properties of a metal roof, enough so that some coated metal roofs are able to qualify as cool roofs.

A standard unpainted metal roof can be a cost-effective solution for some steep-sloped applications, since it is already reflective and requires no additional technologies or materials to achieve cool roof status. Factory-applied white paint increases the cost by about 20 cents per square foot over an unpainted metal roof, while the more efficient integrated cool-roof coatings can add $1 or more per square foot to the cost of the roof [source: Department of Energy]. 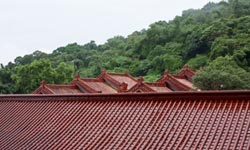 Both traditional and "cool colored" tiles can be good choices for cooling a steep-sloped roof.
Johanna Schmidt/Photographer's Choice/Getty Images

While they aren't as widely used as shingles, both traditional and "cool colored" tiles can be good choices for cooling a steep-sloped roof. Some traditional tiles have naturally reflective properties, depending on their color and the type of the clay they contain.

Tiles have begun to see a slight increase in popularity thanks in part to newer manufactured tiles containing "cool colored" pigments. Developed through a partnership between the California Energy Commission, national research laboratories, and roofing manufacturers, these tiles are produced in earth toned colors including brown, green, and terra cotta, and many qualify as Energy Star materials for steep-sloped roofs. The cost of these "cool colored" tiles is comparable to the cost of traditional roofing tiles [source: Environmental Protection Agency].

3. Get a little misty-eyed

If you'd rather enjoy the benefits of a cool roof without the addition of new surface materials or coatings, consider a roof mist cooling system. Also called an evaporative cooling system, a roof misting system lowers surface temperatures by spraying an extremely small amount of water across the roof, allowing the water to cool the roof as it evaporates.

At its lowest-tech, a roof misting system can be little more than a garden hose set to the "mist" setting and aimed across the roof. (The same method will also quickly and effectively cool your stone patio or wooden deck on a hot day.) Of course, more sophisticated roof mist cooling systems are much more practical for applications such as office buildings and industrial space, as well as for regular residential use. Using sensors to measure roof temperature and moisture, these systems can lower rooftop temperatures by as much as 40 to 60 degrees Fahrenheit (4.4 to 15.5 degrees Celsius) on a hot summer day, while consuming less than one pint (473 mililiters) of water per square foot per day [source: Abernathy] 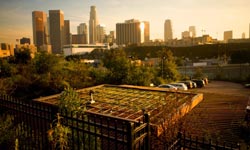 While a rooftop garden isn't technically a "cool roof," it achieves many of the same benefits as qualified cool roof products and reduces stormwater runoff to boot.

A green roof, or rooftop garden, is a vegetative layer grown on a rooftop [source: Environmental Protection Agency]. Green roofs shade the buildings below from direct sunlight and reduce both surface temperatures and surrounding air temperatures through evaporation and transpiration, the process by which plants remove moisture from the soil and emit it through their leaves. In fact, rooftop gardens are so effective that the surface of a green rooftop can actually be cooler than the ambient air temperature [source: Environmental Protection Agency].

With installation costs ranging from $10 to $25 per square foot, green roofs are more expensive than other cool roof options, but it's hard to put a price on the improved quality of life they can provide for building occupants, particularly in urban settings where a rooftop garden may be the only patch of green as far as the eye can see.

Ballasted roofing systems are roofs in which a membrane is laid on the roof deck and held in place by the weight of concrete pavers or natural stones, such as river stones. While ballasted roofing systems don't meet current Energy Star guidelines for cool roofing options, they do meet the "cool roof" standard for Chicago, which has been one of the earliest adopters of rooftop gardens and other green roofing technologies.

In a ballasted roofing system, the same stones that hold the roof membrane in place also provide an insulating barrier against solar heat, much like an adobe building in the desert or an old stone farmhouse that stays cool inside thanks to its thick stone walls. Ballasted roofing systems are relatively inexpensive, and ballasted areas may be combined with rooftop gardens to reduce the overall cost per square foot of a landscaped roof [source: Hoff].