The Capabilities of an Enertia Homes 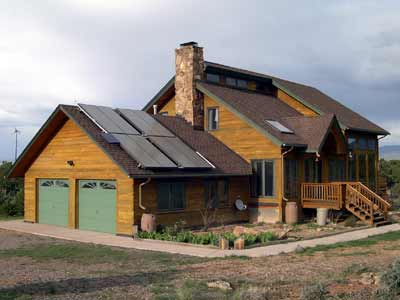 Solar panels can be added to Enertia homes to harness even greater amounts of solar power.
Photo courtesy of Enertia Building Systems, Inc.

Although dwellings built with the Enertia Building System naturally take care of a lot of the heating and cooling necessities of a habitat, there are several other factors involved in determining if they'll make a home completely comfortable to live in without a couple of air-adjusting accessories.

­Probably the biggest of these is the human factor. There's a good chance you know someone who can't stand to be too hot or too cold. You can most likely also bring to mind people who're fine with a bit of roughing it -- like by letting the temperature slide into the upper 70s before they turn on the air or slip down into the low 60s before the heat comes on. Depending on the type of people living in the home, they might choose to wing it or they might decide to install a heater, air conditioner, stoves or ceiling fans to help out on days when the weat­her is a bit extreme. Comfortably harnessing one of these homes may take a little time to get used to according to the folks at Enertia, but once you've got the system down it becomes second nature to make the house work optimally.

Another important factor related to this involves radiant heat. According to EBS's president, Michael Sykes, because the primary living space is heated through radiation as opposed to convection, people feel warmer at lower temperatures -- mainly due to the fact that they're protected from drafty changes in temperature and the mild wind chill caused by forcibly moving warm air.

This brings us to a third consideration. In mild climates, Enertia homes are said to be able to function with greater efficiency than ones in more severe climes. For example, out West there's tons of sunshine and not a lot of humidity, making it one of the ideal environments for this sort of home. But if you're looking to build an Enertia house in a less copasetic location, like one that sees days on end of cloudy or muggy weather, you might want to pick up a few pieces of equipment to kick-start and assist the house's natural abilities to heat up, cool off and dehumidify. Also, in some parts of the country you may be required to install at least a minimal heating and cooling system because of local building codes or mortgage requirements.

One plus to consider if you're looking to add an air conditioner is that you won't be shooting this energy right out the roof ventilator. Because the inner shell is a contained area, all that nice cool air will stay right where you want it. Keep in mind too, depending on the size of the appliances used to supply additional heating and cooling -- and the climate of the location -- these supplementary devices may be able to operate through solar panels so they're not creating an electricity load.

EBS homes are purchased as kits, either in basic universal models or in customizable packages. Different add-on features are available and each model can be adjusted to accommodate a variety of climates and site locations. The homes are also built to be easily upgradable if an owner decides to go completely off the grid.

On the next page, you can find lots of links to articles about other inventions that might serve you in your daily life, and some more interesting info about the homes we live in.