by Linda C. Brinson
NEXT PAGE 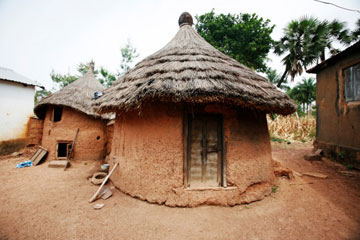 If you've spent any time in the southwestern U.S., you'd know that adobe construction is one of the oldest and most versatile building techniques used by humans. You can find it in the simplest of one-room huts and the world's most elaborate mosques. It's everywhere, but what is it -- and more importantly, where did it come from?

Today, this time-honored material is gaining new popularity as a low-cost, environmentally friendly way of building. After all, adobe is really nothing more than simple bricks made of sun-dried mud. What's more plentiful or inexpensive than dirt and sunshine? As a green-building bonus, adobe's mass helps keep buildings naturally cool in summer and warm in winter, reducing the need for air conditioning and heat.

Adobe construction is not especially complicated. There's a growing movement among do-it-yourselfers and community-action groups to build with adobe. What's not to like about a type of construction that gives you an excuse to play in the mud while doing something worthwhile?

Be careful before you start building, though: Adobe works better in some places than others. There's a reason for this: The mud for the bricks might include sand, small gravel or clay -- whatever makes up the soil in an area. Water, and often straw or grass, are mixed with the dirt. The resulting mud dries naturally in the sun and air. Because fire isn't used to cure them, adobe bricks aren't hard. In fact, they shrink and swell with the weather. Here's where things get problematic: An extremely wet climate prone to flooding might turn the bricks back into mud. Not only that, frequent freezing and thawing can make the bricks crumble. This is why adobe is used primarily in dry, mostly warm climates such as the American Southwest, the Mediterranean region, Latin America, the Middle East and arid parts of Africa and India. However, with careful site selection and construction techniques, adobe can be used in wetter and colder areas.

Before we get to building with adobe, though, let's take a look at its history.