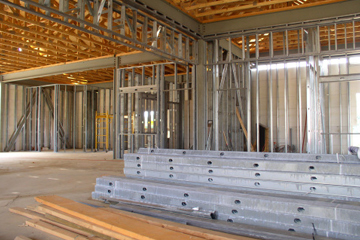 Steel studs are starting to pop up in more residential construction. Want to learn more? Check out these home design pictures!
iStockphoto/Thinkstock

In 1928, Popular Science Monthly reported on a housing trend that was set to take the United States by storm. "It's Here—the All-Steel House," the headline screamed. Steel companies were going from city to city demonstrating how quickly and affordably these exciting, modern homes could be built. In Forest Hills, N.Y., workers easily erected the entire frame of one of these new "modular" homes in three hours and 50 minutes. Any budget deficits caused by the higher price of steel were zeroed out by reductions in labor costs, making these homes incredibly attractive to the American middle class.

World War II put the brakes on the fledging modular steel-frame home industry, however. Steel was requisitioned for use in the war, leaving a dearth of raw materials for private use. Once the war was over, however, steel frame homes once again found their niche in the marketplace. Major architects recognized the benefits of steel construction. Frank Lloyd Wright used steel to frame some of his famous Usonian houses in the 1940s. Some of these, such as The Buehler house in Orinda, Calif., are now on the National Register of Historic Buildings.

Today, steel framing is standard in the commercial building industry, and more and more residential buildings are also being constructed with steel frames. Steel studs have several important advantages over wood. They're comparatively lightweight and are 100 percent recyclable. Unlike wood, steel studs won't bow, bend, shrink or warp. They're impervious to mold and insect damage, and they're fire-resistant. Moreover, according to Atlanta contractor Jeff Lupton of Lupton Design + Build, building with steel studs has become more affordable in recent years.

So why aren't all home decorators celebrating steel? Read on to find out.

How to Build Window Treatments
How to Hang Things on Walls
Why Are Steel Studs More Common Than Wood?