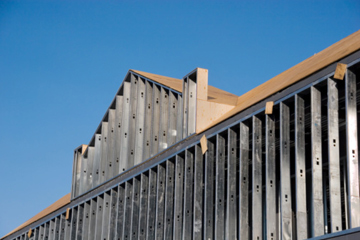 Steel studs have their pros and cons.
iStockphoto/Thinkstock

Steel studs boast a lot of advantages over their wooden counterparts, but they are weighed down with some downsides. Surprisingly, steel studs aren't as strong as wooden ones, especially the lighter versions that can only be used on interior, non-load-bearing walls. Some contractors advise against hanging very heavy things like kitchen cabinets (you don't need those, right?). Steel studs can also cost more than wood ones, and you have to consider some special issues that come along with framing in metal. For one, you have to use different cables and electrical boxes when running wires due to the way that steel can conduct electricity.

Steel studs are often considered more environmentally friendly than wood because steel is recyclable, but others argue that wood is a renewable resource and will eventually degrade. Both mining the ore to make steel and melting it down in the recycling process generate pollution. Metal also conducts cold, so if you have a building with metal framing, you'll want to use a specific type of insulation made of extruded polystyrene to create a strong, thermal barrier. That can actually lead to a more energy-efficient house, though.

In places that are both cold and very humid, you could have the problem of condensation forming on the studs, and since steel can rust, you'll need moisture-proof barriers. For DIY-ers, there's a learning curve -- it's more difficult to cut and screw drywall into steel studs. There are also bits of metal lying around instead of wood shavings. You may not be able to find the heavy duty steel studs (the only kind that can be used for outside or load-bearing walls) at your local home improvement store and may need to track them down somewhere that caters exclusively to contractors.

So, steel studs aren't perfect, and some people prefer to keep using wooden studs. If you do choose steel, you'll still need wood for trim, window and door framing, and bathrooms (because of the plumbing). Which one you pick really depends on your personal preference.

How to Build Window Treatments
How are steel studs changing the way we decorate?
How can you decorate furniture with upholstery nails and tacks?