Who will be at the site and how will it be supervised? 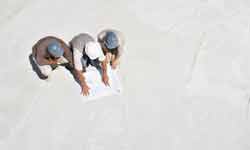 Contractors usually employ subcontractors, so find out exactly who will be working at the site and how they'll be supervised.
Martin Barraud/OJO Images/Getty Images

It's important to ascertain during the course of the interview how the contractor plans on handling site supervision and subcontractors. For starters, a lot of the questions on the last page (such as those concerning licensing, payroll, liability insurance and workers' comp) are inquiries you'll need to put to any subcontractors as well -- everyone on-site must be fully covered.

Another reason it's a good idea to find out whether the contractor has a work crew or intends to roll out a whole series of subcontractors? To obtain records of all the transactions between everyone to save yourself from getting burned if the contractor doesn't pony up. In some states, a mechanic's lien can be placed on your home if subcontractors don't get paid, and they can sue you in court for compensation [source: FTC]. You can protect yourself by asking the contractor, subcontractors and suppliers for lien releases or waivers upon each payment.

Further key questions center on work-site presence. How much time does the contractor propose to spend on your project each week, and how many other jobs is he or she completing in tandem to yours? Does the contractor plan on doing any of the actual labor, or is he or she mainly performing in a supervisory role? How often will the contractor be on-site, and who'll be supervising during times when he or she isn't there? A trustworthy and accountable presence should be on hand at all times.

When consulting the references, feel free to ask them about the workers' behavior. Did they clean up after themselves? Were they on time? And speaking of being on time -- we'll consider the project's timeline on the next page.