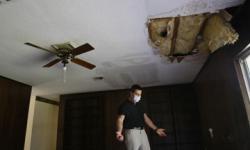 A man wears a mask due to mold growth as he inspects a home in Jupiter, Fla., in April 2008. See more pictures of hidden home dangers.
Joe Raedle/Getty Images

In 2005, at the peak of the housing boom in the United States, more than two million new homes were built [source: McQueen]. In contrast, only half a million homes began construction in 2009 [source: Emrath]. The boom fed the public's nearly insatiable appetite for new construction. Home prices were rising quickly, mortgage terms were loose, and developers were churning out prefab McMansions on the hope of flipping an instant profit.

To keep up with the frenetic pace of construction, corners were most definitely cut [source: Toy]. Developers put pressure on contractors to build cheap and fast (a Seattle developer boasted a 54-day construction schedule) [source: Pulkkinen]. Contractors, pinched for experienced subcontractors, sometimes hired teams of unskilled laborers to handle critical tasks like pouring foundations, hanging windows and shingling roofs. A shortage of quality building materials led to cheap, unstable substitutions. If that wasn't enough, building inspectors were often so crunched for time that they often relied on spot checks that overlooked serious design and construction flaws.

Of those two million homes built in 2005, experts estimate that 17 percent have at least two significant defects -- anything from cracked foundations to leaky roofs to critical structural failures [source: McQueen]. If you thought that newer homes had fewer problems, read more about what can go wrong when work goes too fast.