Why do cookie-cutter neighborhoods exist?

Characteristics and Style of Cookie-cutter Houses 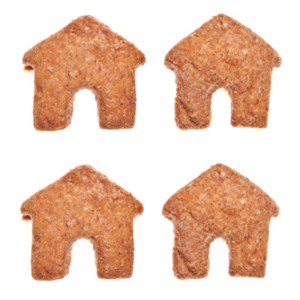 So now that we know how the first tract housing exploded (or multiplied, more accurately), let's find out how exactly those "little boxes on the hillside" are constructed so perfectly identically -- and why.

The answer is as American as tract housing itself: buy in bulk! And it's true; creating 10 identical houses is a lot cheaper than creating 10 distinctive houses. There's a predictable amount of materials that can be bought in large quantities, which means less waste and bigger discounts. Discounts that can, ostensibly, be passed down to a homeowner who can pay less for a home.

Another feature of tract housing was established early on. The Levitts saw the Ford assembly line model, with its streamlined manufacturing system and repetitive construction, and figured out that it could work for them. Each construction worker was given one specific task and moved from house to house completing it. The beauty of the model was that the Levitts (and subsequent tract housing developers) could avoid labor unions by hiring general workers and training them specifically. It also guarded against the high turnover of construction work, as no person had too much "institutional knowledge" and was more valuable than the next [source: Hales].

There's another reason those cookie-cutter homes are so desirable to developers and builders. Just like Levitt did in the '40s and '50s, many of the firms either own or form partnerships with certain supply companies. So, all the windows come from one place, all the doors from another and so on. That's fairly predictable; what Levitt did, however, was actually buy those subsidiary companies. By owning, for instance, the lumber company and nail company that they used, he avoided messy things like strikes (and, again, unions) [source: Materrese].

While this is a pretty clever business move (that some would call downright shady), it also contributed to the utter uniformity of the houses. There was literally not a nail's difference in each Levittown home.

If there's a reason that cookie-cutter homes and neighborhoods exist today, it's that Levitt and Sons' practices worked. The houses are made quickly, cheaply and abundantly. And while it was once delegated to the suburbs, it's now used to make affordable inner city housing for low-income and mixed income homes [source: Seattle Housing Authority].