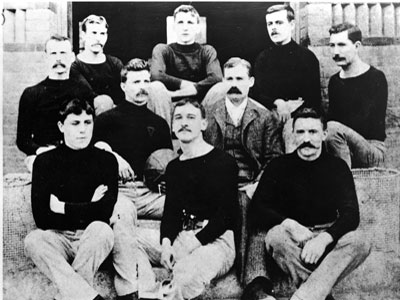 ­On a cold December day in 1891, the first basketball game was played at Springfield College. The game was the brainchild of Dr. James Naismith, who was working for the YMCA training school at the time. Naismith was handed the task of making up an indoor game that snow-bound children could play. In short, the YMCA wanted to wear some rowdy kids out during the harsh New England winters. Naismith fixed two peach baskets to the wall, documented the 13 original rules, and a sport was born. Springfield College is credited with having the world's first basketball court. A simple black and white photograph of that court sold at auction in 2006 for just over $19,000 [source: ESPN].

­The flooring of that gym was made of maple wood planks. As it turns out, the early builders of gymnasiums were right on the money, and sports flooring today is still made from maple. The main reason maple is used is because of how hard and hearty it is. Not only are bowling alley floors made from maple, but oftentimes the pins are as well.

There's a scale that the timber industry uses that indicates the hardness of every type of wood -- the Janka scale. Maple is rated at a tough 1450, compared to 1360 for white oak, 1225 for heart pine and the poor Douglas fir that comes in at a lowly 660 [source: countyfloors.com]. Maple planks can also be used for your home's hardwood flooring. But while you may use maple for its resilience and modern look in your home, there are several differences between your dining room hardwood and the floor on a basketball court. In fact, the kind of wood used is about the only thing that's the same. 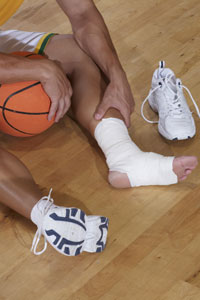 The subfloor of a basketball court helps preserve your back, knees and ankles.
Wendy Hope/Getty Images

­Maple is strong, stiff and resistant to scuffing and scratching. It also has good shock resistance, meaning it can take a pounding from thousands of hours of heavy use on a gym floor without suffering damage. When maple is installed in your home, it will likely be sitting on top of a cement slab or a subfloor made of softer wood like Douglas fir or pine.

Sports flooring is completely different. The floor of a gymnasium needs to have some give and flex. While you may not realize it, every time your foot hits the floor of a basketball court, it sinks slightly and springs back. Of course you don't want this to be noticeable, otherwise you'd feel like you were playing hoops on a trampoline. The idea is that the floor absorbs some of the shock, resulting in less wear and tear on an athlete's body. It's called an orthopedic surface. A restaurant kitchen floor may have a thin layer of padding on top for the same reason. If you're on your feet all day, it can make a big difference in your fatigue level.

There are many types of subflooring for a gymnasium, but they all have the same concept in mind -- to help reduce the impact on your lower back, ankles and knees. One of the most common types of subflooring systems used today for gymnasiums incorporates round rubber pads under a plywood subfloor. The pads are small rubber discs filled with air, set about 12 inches (30.5 centimeters) apart from each other over the entire area of the floor. Think of a fancy athletic shoe that uses air-cushioned soles, and you have the right idea. This padding gives the court the spring necessary to combat fatigue and injury. 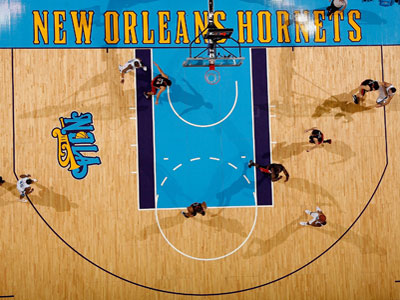 An NBA court wouldn't be the same without painted-on graphics.
Chris Graythen/­Getty Images

­The finishing of a sports floor is a little different than your average home hardwood, as well. Once a sports floor is sanded smooth, it gets two coats of polyurethane sealant. Glossy urethane is preferred on most courts to give it a nice shiny appearance. Once these two coats are down and cured, the game lines and graphics are painted on. The game lines are the markers for the basketball court -- out-of-bounds lines, half-court lines, three-point lines and the key.

The graphics are whatever the owner of the court wants. If it's a school, it will likely be the logo for the university or high school. If it's a private gym like the YMCA, it will be the corporate logo. After the logos and games lines are on, it's time for the finishing coats. This means two to three more coats of urethane. By the end of the process, the game lines and graphics are buried under the top coat and are essentially part of the floor.

Just like with your home hardwood, a sports floor needs to be sanded with a sanding screen between each coat of sealant and finishing urethane. A sanding screen doesn't take off as much urethane as regular sandpaper -- it's more like a fine buff. After the floor is sanded with the screen it needs to be completely cleaned of dust and debris before the next coat of urethane is applied.

Most gymnasiums are for public use and get a heavy dose of daily traffic. Manufacturers and installers of sports floors recommend that they be screened and recoated once a year to help the surface perform like it should. The process of screening and coating is the same as it is during installation. A single pass is made with a circular sander using a fine screen, and one layer of urethane is applied to the top. Think of each pass with the sander and urethane topper as a brand new top layer to your floor. The same thing applies to your home hardwood floor, although it's not necessary to do so once per year.

A gym floor takes a couple of days to screen and recoat and it's typically ready for basketball after about 72 hours of curing. If the gymnasium is commonly used for other nonathletic purposes it may need more than one screen and recoat per year. One example is a high school gym that's also used for assemblies and school dances. Chairs, tables and non-sneaker shoes can wear out a gym floor much quicker than if it's only used for sports and recreation.

Green is the color we just can't get enough of these days. Some companies, like EcoSport have begun to manufacture environmentally sound sports flooring. Rubber trees are used to produce latex, but can only do so for about 25 years. When these trees are put out to pasture, EcoSport recycles them for useable hardwood. The wood is not quite as hard as maple, but is still resilient enough for use as sports flooring. These floorboards are prefinished with eight total coats of sealant and topcoat. They're prefab courts and even come with game lines ready to go, depending on your sport of choice. 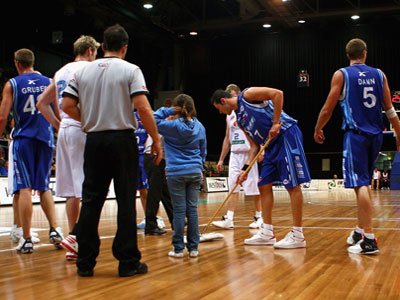 Sometimes players even get in on the floor-cleaning action.
Mark Kolbe/­Getty Images

­Keeping a gymnasium floor clean is the most important factor in how long it will last. Dirt and dust are enemies of any hardwood. Dirt from the bottom of your shoe will act like a fine abrasive and wear away the flooring with every step you take. Ideally, a sports floor is cleaned on a daily basis. If you really want to protect and maintain your gym floor, it should be dry mopped between each activity. This will help to remove the dirt and dust. The daily cleaning should be done each evening with a wet mop. The wet mop will clean up all the fluids that can collect on a gym floor -- think sweat and Gatorade.

The wet cleaning should use warm water and a floor cleaner made specifically for cleaning sports flooring. These are water-based concentrates that clean the floor without leaving behind any residue. Wet cleaning the floor will keep the surface traction nice and tight. You don't want your star point guard slipping because of improper maintenance.

Maple is ideal not only for its strength and durability, but also because the grain of the wood is extremely tight. The fine fibers of maple help to keep it from splintering and also keep dirt and dust from finding a home "between the cracks." If the dirt is unable to firmly root in the grain, then it's easier to clean up, giving your sports floor and longer life span.

What's the best carpet for new parents?
Top 10 Flooring Do's
What do you need to know when choosing carpet?